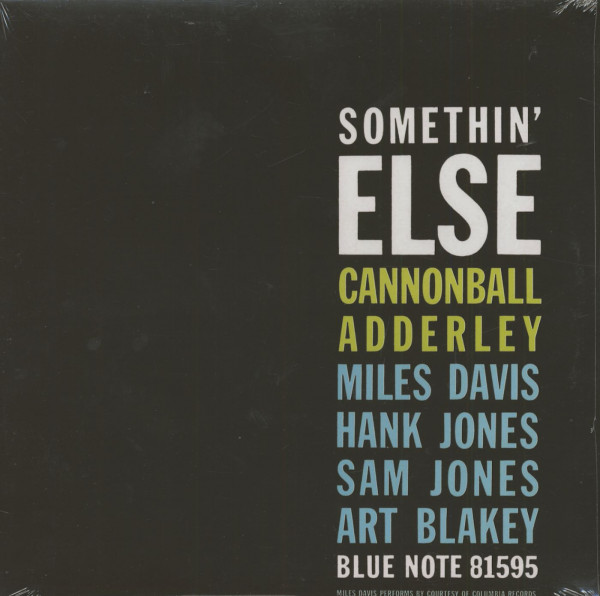 This was a decade where even a straightahead jazz combo could score a major pop hit—especially if the song sported a catchy, melodic hook and a strong hint of the blues. Alto saxophonist Julian 'Cannonball' Adderley (his nickname stemmed from his voracious appetite, his high school classmates likening him to a cannibal) hailed from Tampa, Florida, where he was born September 15, 1928. He came from a musical family: his brother Nat followed in their father's footsteps by taking up the cornet.

After leading Army dance bands during his early '50s hitch, Cannonball recorded jazz albums within a week of one another for Savoy and Mercury's EmArcy imprint in July of 1955 (bassist Paul Chambers, drummer Kenny Clarke, and Nat played on both). A string of LPs for EmArcy followed. Cannonball joined Miles Davis' group in 1957 for a two-year stint crucial to the saxist's development. He moved over to Riverside in 1958 and remained prolific, scoring a '61 hit single with African Waltz.

Adderley jumped to Capitol in 1964, waxing several more LPs prior to 'Mercy, Mercy, Mercy! Live At The Club.' David Axelrod produced the set, allegedly at a popular Chicago jazz room run by WVON deejays E. Rodney Jones and Pervis Spann but in reality in front of a boisterous invited audience at L.A.'s Capitol Studios. Cannonball's quintet now consisted of Nat, bassist Victor Gaskin, drummer Roy McCurdy, and Joe Zawinul, a classically trained, Vienna-born pianist who brought the mellow-grooving Mercy, Mercy Mercy into their repertoire and supplied its integral electric piano underpinnings. Out as a Capitol 45, the instrumental leaped to #2 R&B and #11 pop early in the year—lofty heights for a jazz number.

+The soulful L.A. duo of Larry Williams and Johnny 'Guitar' Watson quickly wrote lyrics to Mercy, Mercy, Mercy and posted a national R&B hit in the spring of '67 for Columbia's OKeh imprint with their vocal adaptation. "It was my idea. We didn't really do that well with it," said the late Watson. "I felt kind of strange about it, because we had problems with Cannonball, with the publishing and all. It was an instrumental, and they didn't want to accept our lyrics for it." Then The Buckinghams, a Chicago rock band riding high on Kind Of A Drag and Don't You Care, covered Larry and Johnny's version and had a Top Five pop smash on Columbia that summer. "We didn't really expect it to be a single," says Buckinghams guitarist Carl Giammarese. "We just thought it'd be a nice cut on the album, but everybody flipped out over it."

Zawinul went on to co-found Weather Report in 1970, while Cannonball remained a revered jazz luminary until he died of a stroke on August 8, 1975.