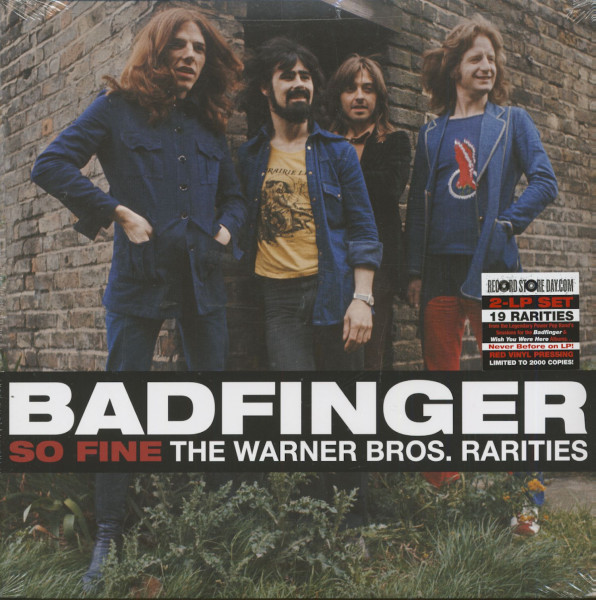 Badfinger became musical sidekicks for the former Beatles, performing on George Harrison's All Things Must Pass (1970) and Concert for Bangladesh (1971) and backing John Lennon on Imagine (1971) and Ringo Starr on his hit, 'It Don't Come Easy' (1971). Despite ties to the label's owners, Apple repeatedly rejected Badfinger's demos and quashed their recording sessions.

Their third album, Straighten Up (1971), was produced by Todd Rundgren and included the downhearted hit singles 'Day After Day' and 'Baby Blue'.  Straighten Up marked the band's zenith. Although their music was all over AM and FM radio in the United States in
1972, Badfinger's success rapidly unraveled. A series of ill-conceived management deals left them with little money, and financial troubles at Apple resulted in slender advances. Their final album for Apple, the unfortunately titled Ass (1973), contained a swipe at the label, 'Apple of My Eye',  and sold poorly.

Badfinger moved to Warner Brothers and quickly recorded Badfinger (1973) while dashing off songs in the studio. Their eponymous LP was released almost simultaneously with Ass and failed to garner attention. As management and legal problems mounted, Warner Brothers pulled Badfinger's Wish You Were Here (1974) from distribution seven weeks after release. A year later, with the existence of Badfin-
ger's LP barely noticed, Pink Floyd faced no difficulties titling their next album Wish You Were Here.

Told he had no money and unable to contact his management, Ham hanged himself in his recording studio in April 1975. He left behind a note blaming the band's American manager, Stan Polley. Badfinger dissolved as members joined bands of little note, played on sessions, or performed manual labor to survive in light of their missing royalties. Economic necessity drew vocalist-bassist Tom Evans and vocalist-guitarist Joey Molland to call their new band Badfinger. 'Love Is Gonna Come at Last' from their album Airwaves (1979) received modest airplay, as did 'Hold On' from Say No More (1981). Afterward, Evans and Molland led rival bands under the Badfinger name. Lawsuits pursued their endeavors. In 1983, Evans followed Ham's lead by hanging himself at his home. Despite his death, Molland reunited with other bandmates and toured as Badfinger.