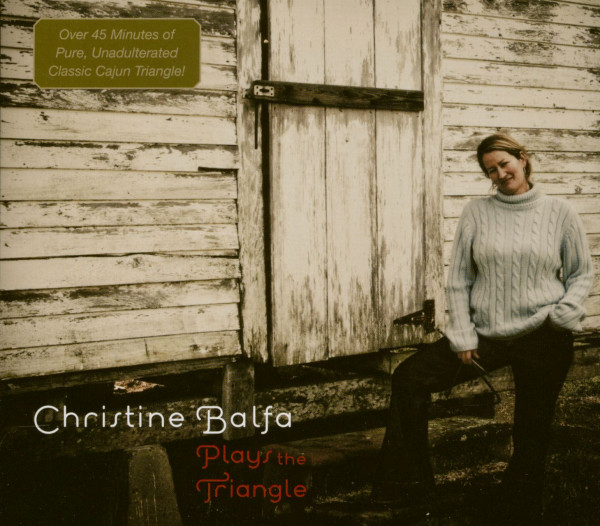 Nearly An Hour Of Pure, Unadulterated Classic Cajun Triangle. Seriously, Its An Idea So Simple And So Brilliant, We Had To Get Cajun Royal Lineage Involved! This Is Sure To Become A Collector's Item, As We're Only Going To Print A Limited Amount, And It Features Christine Balfa's Playing, The Production Of Chas Justus, Ans The Engineering Of Joel Savoy. No One Will Ever Do This Again.

Working with Christine on this record was effortless. Any artistic direction I could have given would have just gotten in the way of her purely simple yet nuanced style. Her playing transcends genre, stripping away superficiality and reaching directly to the core. It’s playful, emotional and at times cathartic. Let her take you on a journey of musical discovery that channels the old masters yet remains innovative and uniquely Christine.
- Chas Justus, Producer
Christine Balfa comes from a long line of traditional Cajun musicians
centered in the prairies of Southwest Louisiana.  Her father Dewey gave her a triangle while she was still a toddler and she spent much of her childhood jamming with the Balfa Brothers in the family home near Basile.  It wasn’t long, however, until she found herself longing to break free from the stifling tonality of fiddles, accordions, and guitars. An undeniable need to express the sounds she heard around her without limitation – mama stirring coush coush in the pan, cowbells tinkling as the herd came back in for the night, daddy grinding the school bus gears in the morning – became the dominating force in her life.  This CD realizes, at long last, her vision of liberation for the instrument.  Unfettered by melodic or harmonic content, she can finally tell her story, and the story of her people, to the world.
- Dirk Powell, Expert