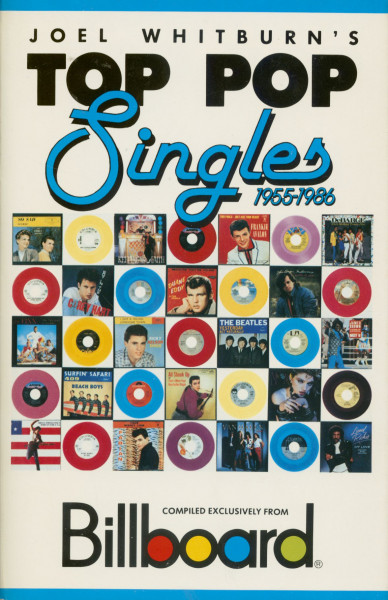 AUTHOR'S NOTE
This is the fifth edition of TOP POP SINGLES. It is hard to believe that 17 years have passed since the first edition was published in 1970. From that first crude 208-page edition, to this volume, nearly four times that size, I have had the great pleasure to work in the most exciting and unpredictable industry in the world. Researching the Billboard charts, collecting the charted hits, and publishing musical record books has truly been a 'labor of love'. This simple cliche is an apt summary of a career that is really just an extension of a hobby. My initial research of the Billboard pop charts, compiled on 3 x 5 cards, was intended solely as a means of cataloging my burgeoning record collection.

With little or no inclination that others shared a devotion to the charts, I felt that my interest in chart statistics and record collecting bordered on fanaticism. It didn't take long to discover that there were thousands of music fans with a similar fascination of exploring the depths of the Ameri-can record charts.
Through the tremendous national and international support of my publi-cations from disc jockeys and record fans, I have been able to expand my research to include not only the singles and albums of Billboard's pop charts, but also the various other weekly Billboard charts. Followers of the Country and Black charts can look forward to our upcoming expanded revisions of these books, as well as many other projects that are currently in the works.

While planning this edition, I wanted to greatly enlarge the artist bio-graphies and various other notes of trivia so that a single volume would offer information on not only the charted hits, but on the artists supplying these hits. So, for most of the top artists in this edition, you will find a paragraph covering the highlights of that artist's career. I had hoped to provide at least one line of trivia for each of the 4,186 artists listed herein. However, even with all the research at my disposal, I simply could not find facts for many of the 'one-shot' artists. If you have supporting evidence about any artist in this book who does not have a biographical entry, I would appreciate hearing from you. I will continue to seek out information on these obscure artists and update the notes on the established ones to make further editions even more complete and valuable.

A novel feature to this edition are the listings of the peak positions and the various Billboard pop charts under many of the song titles from 1955-1958. During this period. Billboard published multiple pop charts. Now that all chart activity of each of these hits is listed, you can decide which ranking you qualify as the decisive one. Once again, thanks to all of you for your continued support, encourage-ment. and patience in waiting for these revised editions. It is my goal to make these revisions available every two years — a timetable that you can rely on. Please continue to write and let us know of any corrections or improvements you would like to see.
JOEL WHITBURN