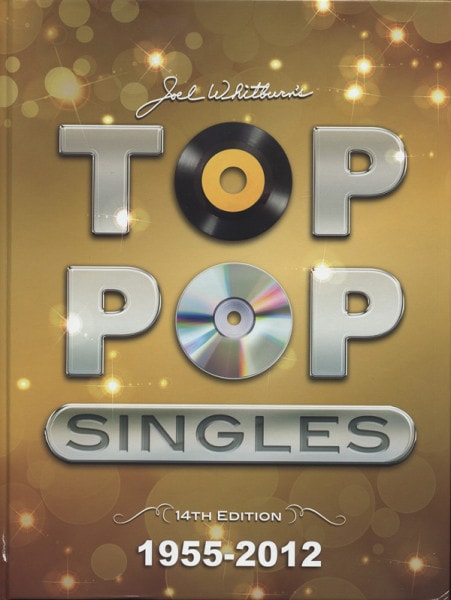 (2013/Record Research) Joel Whitburn, Hardcover, 22x28 cm, 1120 pages, 2.5kg. In 1965, Joel Whitburn thought of a new hobby but ended up creating an entirely new trade. He turned to his collection of Billboard magazines and began documenting the journey of each song, from its entrance on the “Hot 100” chart to its exit. Joel carefully checked the title, artist and label of every entry against the actual records of his vast music collection, making corrections to the chart’s listings where needed. Week by week, position by position, he noted each song’s debut date, peak position and weeks on the chart, and much more. He was creating a whole new entity: music chart data. Five years later, after repeated requests from collector colleagues for his personal record-keeping, Joel typed out the research that he had painstakingly written on 3” x 5” index cards. He arranged it into an artist-by-artist listing in a slim, gold paperback, simply titled “Record Research.” That book spawned a business of the same name and provided the first look at music history through the lens of chart performance. Joel invented the concepts of “debut dates” and “peak positions” and so much more that is now essential in music lexicon. His flagship book is now in its 14th edition! Top Pop Singles 1955-2012 is a comprehensive and detailed chronicle of every song and artist that hit Billboard magazine’s pop singles charts since the dawn of the rock era! This thick, 8.5” x 11” hardcover bears little resemblance to that first edition. With over 15 pieces of information possible for each song, Top Pop Singles contains not only the current music, but even more data on older songs and artists, and new “classic non-Hot 100” songs! WHAT’S NEW? • Songwriter(s) and B-sides of every song! (See quiz below.) • A return to true chronological order for artist discographies • A streamlined approach to the listing of “Featured artists” • More classic non-Hot 100 songs • Chronological and alphabetical listings of all Rock and Roll Hall of Fame nominees (not just the inductees) • Over 500 new artist photos from picture sleeves, cassette and CD covers • New clover symbol indicates if artist had at least 24 hits and is in our '24 Club.' Chronicles the more than 8,600 artists and nearly 42,000 songs over six decades that ever appeared on Billboard magazine's early pop singles charts (Best Seller, Disc Jockey, Juke Box, Top 100), 'Hot 100,' Bubbling Under the Hot 100, Breakout, Territorial, and Hot 100 Airplay charts PLUS thousands of non-charted classics. Research cut-off date is May 25, 2013. ESSENTIAL CHART DATA...Peak chart position, chart debut date, total weeks charted, total weeks at #1, #2 or #3, original label and number - and much more! All hits are listed under their artist in chronological order. INVALUABLE INFO... Main section of this edition includes pre-1955 artists and songs that contributed to the very roots of rock and roll, such as Roy Brown's 'Good Rockin' Tonight' from 1948 and Jackie Brenston & His Delta Cats' 'Rocket '88' from 1951! Rock & roll EP's and their chart data is shown from Billboard's 1957-1960 'Best Selling Pop EP's” chart, among these are collectable EP's by Buddy Holly, Jerry Lee Lewis, Little Richard, Elvis Presley and The Everly Brothers. ACCURATE ARTIST FACTS... Updated artists' bios, photos, Decade and All-Time rankings, Grammy, Billboard, Rolling Stone and Rock and Roll Hall of Fame awards! NEW “FEAT.” LISTING … “Featured” artists are accorded the same billing as “guest” artists of the past, so a song on which an artist is simply “featured” is now shown only under its lead artist. For example, Lil Wayne’s chart listing now shows his 53 hits as the lead artist and below his bio is a new “FEAT.” listing that references the lead artists of the 84 hits on which he was featured. FIND-IT-FAST FEATURES... Top hit by an artist with 10 or more hits is underlined. / All Top 10 titles are shaded. / #1 hits have a special peak position symbol. / Gold and Platinum recordings are indicated with symbols. / Hot 100 Airplay hits show a special bracketed symbol. / Label configurations, such as cassettes, CDs, 45s, 12” records and picture sleeves all have a column with bold symbols. / Letter symbols indicate Instrumental, Christmas, Live, Reissued recordings, etc. #1 symbols are shown for any title that hit #1 on these other charts: R&B, Country, Rock and Adult Contemporary! DETAILED TITLE TRIVIA All #1 Hits listed chronologically PLUS Major Awards, Top 200 Honor Roll Of Hits, A-Z Song Title Section, Top Artist Achievements, Top 500 Artists Ranking -- And Much, Much More! THINK YOU KNOW SONGWRITERS? How Many ... Beatles’ hits did George Harrison write? Elvis Presley hits was he credited as songwriter? Creedence Clearwater Revival hits were not written by John Fogerty? of Neil Diamond’s 56 hits were not written by him? of Smokey Robinson’s 32 hits were not written by him? The book has light damages in the corners which are not very obvious.