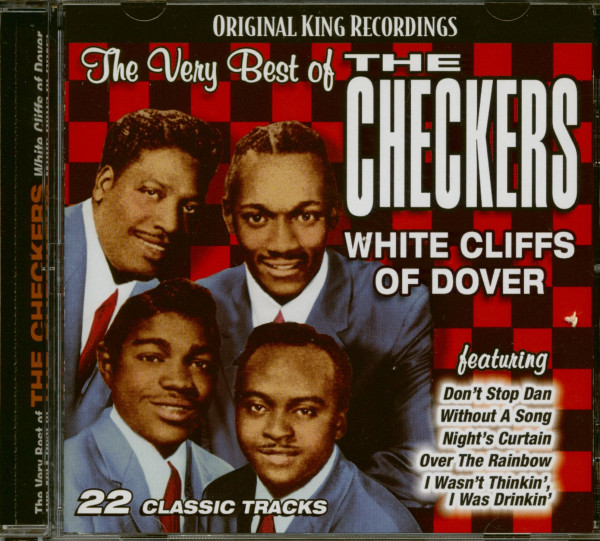 The Checkers: White Cliffs Of Dover - The Very Best Of The Checkers (CD)

(Collectables) 22 tracks (56:59) original King recordings
,-
The Checkers were formed as an off-shoot of the wildly successful vocal group The Dominoes. Billy Ward's group had one of the first R &, B hits that also made the Pop charts as well in Sixty Minute Man in 1951. Although most of The Dominoes recordings for Federal Records featured a young Clyde McPhatter, who would go on to fame as the founder of The Drifters and later as a solo artist, Sixty Minute Man was sung by the bass of The Dominoes, Bill Brown. It was Brown, along with fellow Dominoes member Charlie White, who left the group in 1952 to form their own group, The Checkers.

The Checkers began recording for King Records in 1952. Because their sound was so similar to The Dominoes, there was immedi-ate speculation that they were actually The Dominoes recording for the main label of the Federal subsidiary. The Checkers were a quartet, as we know by the one surviving pic-ture of the group. The other two original mem-bers were John Carnegie and someone only remembered as "Joe." The Checkers first recording session took place on June 20, 1952. Their first single cou-pled Oh, Oh, Oh Baby with Flame In My Heart and was released in August. A second record-ing session on September 19, 1952 yielded their second release in November, 1952 when Let Me Come Back was paired with Night's Curtains. The group's third release in January, 1953 took My Prayer Tonight from the first session and placed it with Love Wasn't There ifrom the second session.

At this point, Charlie White left The Checkers to become the lead singer of The Clovers for about a year, replacing original lead singer Buddy Bailey while he was in the army. He was replaced in The Checkers by someone remembered only as "Teddy." Shortly after this, John Carnegie was draft-ed as well. He was replaced by Perry Heyward. The Checkers returned to the recording studio on April 17, 1953 specifi-cally to cover / Wanna Know, which was a big hit by RCA Victor's group The Du-Droppers. The Checkers version was cou-pled with Ghost Of My Baby on which Heyward does his best McPhatter imitation. This single was released in April, 1953.

Heyward did not stay for long with The Checkers, leaving in the summer of 1953 to return to his previous group The Sparrows. Heyward's replacement in The Checkers was Little David Baughan. The Checkers next session took place on September 26, 1953, and produced their best seller, White Cliffs Of Dover. The single was coupled with a track left over from the group's first recording date, Without A Song. Released in October, 1953, it must have been a slow but steady seller because it never made the national charts, but appeared as a "Territorial Tip" in the trade papers for Los Angeles in March, 1954.

Two other sides cut at the session with White Cliffs Of Dover,Y You Never Had It So Good and I Promise You were released as a single almost simultaneously with it, being only two numbers apart on King Records. Their next recording session on March 12, 1954 produced The Checkers next two singles. Don't Stop Dan, a belated answer to Sixty Minute Man, was coupled with House With No Windows, a song that was later recorded by King's biggest selling vocal group, Hank Ballard and The Midnighters. It was released in April, 1954. Don't Stop Dan also sold well for The Checkers, as evidenced by two "Territorial Tip" listings: Charlotte, in June and Cincinnati, in July. You've Been Fooling Around and Over The Rainbow from the same recording session became The Checkers next release in June, 1954.

David Baughan left The Checkers in late spring to replace Clyde McPhatter of The Drifters (who had also been drafted!). Bill Brown now formed an entirely new Checkers group with Eddie Harris from The Blue Dots on DeLuxe Records, David Martin (from Percy Heyward's group The Sparrows), and James Williams. This group's first ses-sion took place on October 1, 1954, and as with their previous session, produced their next two singles. Mama's Daughter, another belated answer record (to Ruth Brown's Mama He Treats Your Daughter Mean from the spring of 1953) was coupled with / Wasn't Thinkin', I Was Drinkin' and released in November, 1954. Can't Find My Sadie and Trying To Hold My Gal from the same session was The Checkers tenth and final release in December, 1954.

This seems strange, because the group had finally become popu-lar enough to be booked by Universal Attractions in a package show which toured the South and Midwest from November to January with Dinah Washington, Danny Overbea and Cootie Williams (with James Moody replacing Williams' orchestra towards the end of the tour). As a footnote to their career, King released one final single under the name The Checkers in 1958, Heaven Only Knows backed with Nine More Miles. It is unknown if any of the original group members were involved in this recording.

Baughan recorded on his own for Savoy Records as Little David and The Harps in 1955, and as Little David for Mercury in 1958. Likewise, Charlie White cut a single of his own for Winley Records in 1957. Eddie Harris had joined the Marktones who recorded for Ember in 1957. The Checkers were an excellent vocal group that King Records must have had a lot of faith in, because they released eleven records by them without the benefit of a major hit. It certainly wasn't for lack of ability, as a listen to the contents of this CD will , , , , quickly attest. (Victor Pearlin)

Artikeleigenschaften von The Checkers: White Cliffs Of Dover - The Very Best Of The Checkers (CD)

House With No Windows

The Checkers were King Records' principal hard-luck group prior to The '5' Royales' arrival. One first-class release after another failed to crease the R&B charts the way their labelmates, The Dominoes, had. Their 10 King singles frequently earned regional success, but a national hit always proved elusive.

The New York group had made its King debut in 1952, constructed around the booming bass of ex-Dominoes lead Bill Brown (who portrayed the lusty 'Lovin' Dan' on their '51 mega-smash Sixty-Minute Man) and another former Domino, tenor Charlie White, who left The Checkers to join The Clovers in early '53. White was initially replaced by ex-Sparrows tenor Perry Heyward, then ex-Drifter Little David Baughan, whose uncanny vocal similarity to Clyde McPhatter would have made it problematical to stay a Drifter for long. Tenor Irvin 'Teddy' Williams, there from the beginning, and a baritone only recalled as 'Joe' or 'Buddy' rounded out The Checkers as they headed into 1954.

The group had come close several times to breaking through with such gems as Flame In My Heart (it's on our '52 disc) and an upbeat treatment of the wartime anthem White Cliffs Of Dover (you'll find it on our 1953 volume). King A&R man Henry Glover had been in charge of The Checkers' output from the outset. He wrote the eerie ballad House With No Windows, a Baughan showcase cut March 12, 1954 that's as accurate a McPhatter knockoff as you're likely to find. It was issued the next month with another track from the same date, the ribald Don't Stop Dan (Brown reviving his horny alter ego), as its flip. Both sides were tabbed as regional sellers, but as usual they didn't quite make the national grade.

This edition of The Checkers was history by late spring. Baughan replaced McPhatter in The Drifters when Clyde was drafted, becoming the first in a never-ending series of Drifters replacement lead tenors. Brown recruited tenor Eddie 'Monkey Man' Harris of The Blue Dots to replace him, adding second tenor David Martin of The Sparrows and baritone James Williams so The Checkers could make a last date for King in October. Neither Mama's Daughter b/w I Wasn't Thinking, I Was Drinking nor Can't Find My Sadie b/w Trying To Hold My Gal changed the quartet's luck, and Brown gave up in 1955. King brought back the Checkers name three times late in the decade to release stuff by totally unrelated groups.