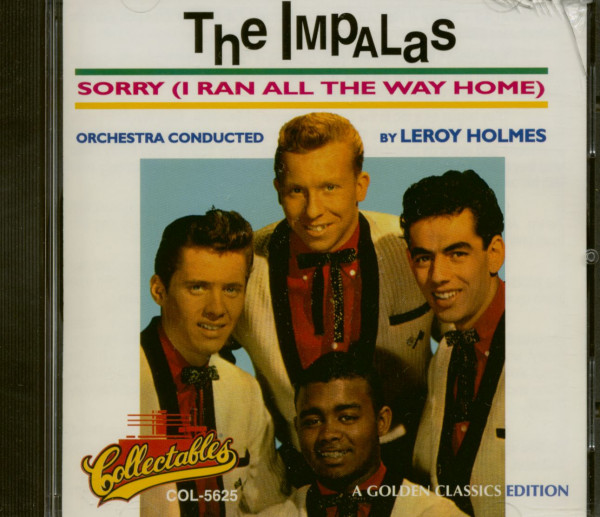 The Impalas: Sorry (I Ran All The Way Home) (CD)

Artikeleigenschaften von The Impalas: Sorry (I Ran All The Way Home) (CD)

Erfahre mehr über The Impalas
The Impalas Sorry (I Ran All The Way Home) Unlike The Falcons, The Impalas started out... mehr
Menü schließen
"The Impalas"

Sorry (I Ran All The Way Home)

Unlike The Falcons, The Impalas started out integrated and stayed that way. The Caucasian three-quarters of the group (first tenor Tony Carlucci, second tenor Lenny Renda, and baritone Richard Wagner) came together in the Canarsie section of Brooklyn. Their rehearsals in a local candy store and on neighborhood street corners attracted the attention of African-American tenor Joe 'Speedo' Frazier, who came in as lead singer. Depending on your source, their moniker stemmed from either the fleet animal or the Chevrolet model of the same name.

The Impalas' 1958 debut single for Dot-affiliated Hamilton Records, pairing First Date and I Was A Fool, went nowhere. Songwriters Aristides Giosasi (the male half of the Brooklyn-based brother-sister duo Gino & Gina, whose [It's Been A Long Time] Pretty Baby was a Top 20 hit in the spring of '58 on Mercury) and Artie Zwirn gave them the catchy, upbeat Sorry (I Ran All The Way Home). Through deejay Alan Freed, who grabbed the publishing for his Figure Music, the quartet landed a pact with MGM's Cub subsidiary.

They waxed Sorry and its Giosasi/Zwirn-penned B-side ballad Fool, Fool, Fool at New York's Metropolitan Studios on October 30, 1958, Leroy Holmes conducting the orchestra. Released the following January and boasting a splendid acappella intro, Sorry vaulted to #2 pop and #14 R&B that spring. The quartet's breath of rarified chart air was brief. Oh, What A Fool, another Giosasi/Zwirn copyright that was their first Cub encore, peaked at #86 pop with Sandy Went Away on the flip. Peggy Darling b/w Bye Everybody went nowhere before year's end. Billing them as Speedo and The Impalas didn't help All Alone b/w When My Heart Does All The Talking in 1960. Cub pressed up an LP named after the group's greatest hit. 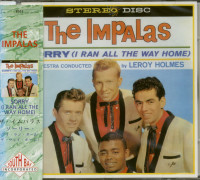 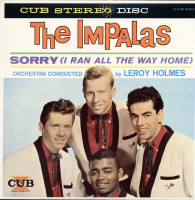