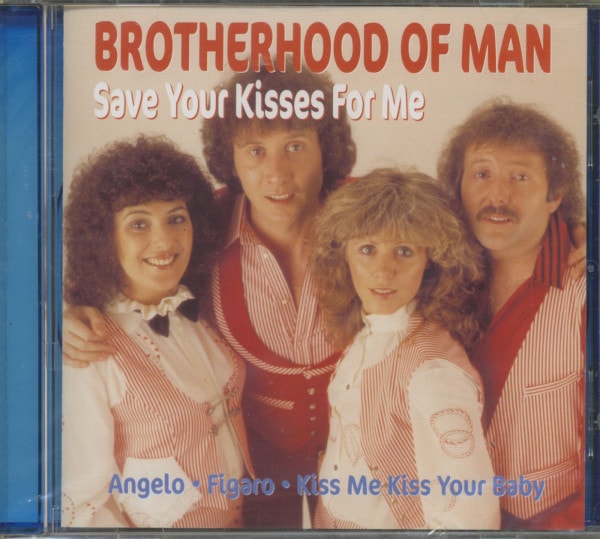 Brotherhood Of Man: Save Your Kisses For Me (CD)

Artikeleigenschaften von Brotherhood Of Man: Save Your Kisses For Me (CD)

will always be associated with the Eurovision Song Contest, having become Britain's third ever winners (after Sandie Shaw and Lulu) in 1976. Yet they were originally modelled on an American vocal group, the Fifth Dimension, who found enormous success in the late '60s singing the songs of Jimmy Webb and Laura Nyro under the direction of the legendary Bones Howe.
Songwriter/producer Tony Hiller put the original Brotherhood of Man together in London in 1969 specifically to sing a song he'd co-written. The five seasoned session singers employed were Roger Greenaway, Tony Burrows, Johnny Goodison, Sue Glover and Sunny Leslie.

Though the quintet's first single, 'Love One Another', flopped, a second, 'United We Stand' became a UK Top 10 and US Top 20 hit. This was followed by two more, 'Where Are You Going To My Love' and 'Reach Out Your Hand', the latter in
the US only. Greenaway was replaced by Russell Stone, but the individual group members were in great demand and, by 1973, the line-up was no more. But the nucleus of a new group started to come together in 1974 when Tony Hiller signed Martin Lee and Lee Sheridan as writers to his music publishing company. They recorded 'Lady', which was a hit in France and Belgium, while the follow-up 'Kiss Me Kiss Your Baby' was a hit all over the continent in 1975, obliging the group to appear on TV shows in France, Belgium, Germany and Switzerland. By 1976, the second Brotherhood incarnation would be well known throughout Europe.

Nicky and Sandra Stevens had been recruited as the female half of the group, and it would be Martin, Lee, Nicky and Sandra who'd sing the Brotherhood to victory in the Hague with the five million-selling 'Save Your Kisses For Me'. The song, a British Number 1 for six weeks, was inspired by Hiller's trips away from his family's London home to write with the male group members.
'Kisses' was replaced at the top by Abba's 'Fernando' - and, after lesser hits with 'My Sweet Rosalie' and 'Oh Boy (The Mood I'm In)', the Brotherhood would return to pole position with two songs ending in 'o'. 'Angelo' swam against the disco tide, surfacing for a single week between Donna Summer and the Floaters in August 1977, while 'Figaro' hit the top in February 1978, a Valentine's Day hit if ever there was one. "It's a fun record," Tony Hiller remarked of 'Figaro' two decades later, "that came about because my daughter went on holiday and came back talking about all the dishy Spanish waiters trying to pick up the girls."
Once more the Brotherhood gave way to Abba and 'Take A Chance On Me'. But 'Beautiful Lover', which followed 'Figaro' and 'Angelo' in singing the praises of foreign men, peaked much lower, at Number 15. Next came 'Middle Of The Night', their last hit on the Pye label and their penultimate UK chart entry.

If the super Swedes were a hit machine, Tony Hiller reveals the Brotherhood were more than at home in the studio too. "We could do an album in two weeks. They would bring up their own harmonies. They were a joy to work with, and it shows." The 34 songs showcased here not only include their own hits but a selection of classic '70s songs popularised by Boney M ('Rivers Of Babylon', 'Brown Girl In The Ring'), the Bee Gees ('How Deep Is Your Love'), Manhattan Transfer ('Chanson D'Amour') and David Soul ('Don't Give Up On Us'). Lee Sheridan left the group in 1982 to take a degree in music and produce other acts; he was replaced by Barry Upton, who would himself later write and produce Steps' breakthrough hit, '5, 6, 7, 8'. The Brotherhood'sfinal UK came that year with 'Lightning Flash', while they wrote 'When The Kissing Stops' for another group, Rubic, to enter Eurovision with. In 1984 the quartet called it a day though, since Sandra and Martin were by now a married couple, it clearly wasn't to be the end of the story.

In 1985, Brotherhood of Man were invited to take part in a nostalgia TV programme and, as a result, the classic line-up decided to get back together. But each now had other irons in the fire: Nicky recorded demos for a rock album, while Martin co-wrote a musical The Butterfly Children, with David Kane and Paul Curtis. This would be staged in the West End in 1991 and its soundtrack, sung by Brotherhood of Man, made available at the theatre - though never to a wider world. Ironically, the current nostalgia circuit for '70s and '80s music, mostly hosted in hotels and holiday camps, sees Brotherhood of Man performing alongside a Bucks Fizz line-up - though Abba, sad to say, have left many tribute acts such as Bjorn Again to celebrate their musical legacy. The Brotherhood have also proved a big hit on the gay club circuit, not least because 'United We Stand' was adopted as an anthem by the early-'70s gay pride movement.
Furthermore, with the advent of the Internet, a thriving web site has been formed by superfan Rene van der Drift which seeks to keep the name of the group in the forefront of pop pickers' minds.

While it's fair to say Brotherhood of Man never made it as big or were as influential as Abba (who were?), they have charted their own course and are well respected for it. Their current stage act sidelines the dated dance routines and includes such classics as 'Wind Beneath My Wings' and 'I (Who Have Nothing)' as well as adventurous covers of material by Prince, Meatloaf and Foreigner. Yet there are certain songs they'll never be able to leave the stage without performing, and many are on this record. It's still worth saving your cheers for Brotherhood of Man!
Michael Heatley