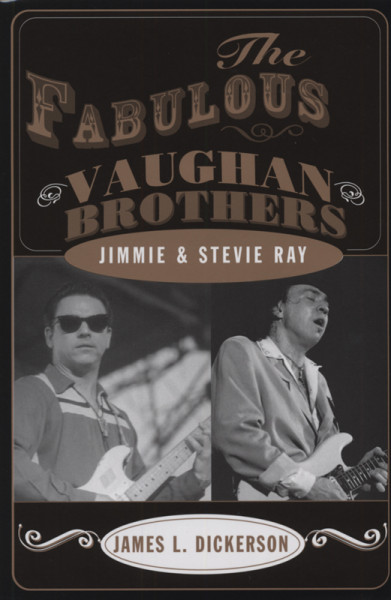 Jimmie and Stevie Ray Vaughan-two sons of Texas whose pyrotechnic guitar work introduced an entire generation to the blues-are given full biographical treatment by a writer who tracked their careers for five years, until Stevie Ray's sudden death in 1990, and afterward as Jimmie pursued a solo career that continues to flourish.

Based on scores of interviews with such well-known contemporary musicians as B.B. King, Robert Cray, Ron Wood, the late Carl Perkins, Jerry Lee Lewis and others, The Fabulous Vaughan Brothers follows the two brothers from their modest Dallas roots to their emergence onto the Austin music scene. The brothers' subsequent recording experiences in Memphis-which the author sees as being crucial to their overall development as musicians-are also described, as well as their early bands and, of course, their work together on Family Style.

Though occasionally working in tandem, the careers of the Vaughan brothers took separate if parallel paths, Jimmie finding early critical but not overwhelming popular success with his group The Fabulous  Thunderbirds, Stevie Ray finding both as his career took off quickly in the 1980s. Grammy awards, a seven-consecutive-year run as Guitar Player's "Best Electric Blues Guitarist," and even a performance at an inaugural party for George Bush in 1989 all helped establish a persona that reached legendary status at his untimely death.
Jimmie eventually found popular acclaim with his 1986 album Tuff Enuff, following which he left the Thunderbirds to pursue a solo career.

James L. Dickerson
An expert on American pop culture, music historian and biographer James L. Dickerson has worked as magazine editor, newspaper reporter, columnist, book critic, photographer, social worker, and psychological consult-ant over a career that spans thirty years. The author of nineteen books and thousands of magazine and news-paper articles, his byline has appeared in a variety of publications, including Good Housekeeping, Omni, Glamour, BookPage, and the Toronto Star. He lives in Brandon, Mississippi.