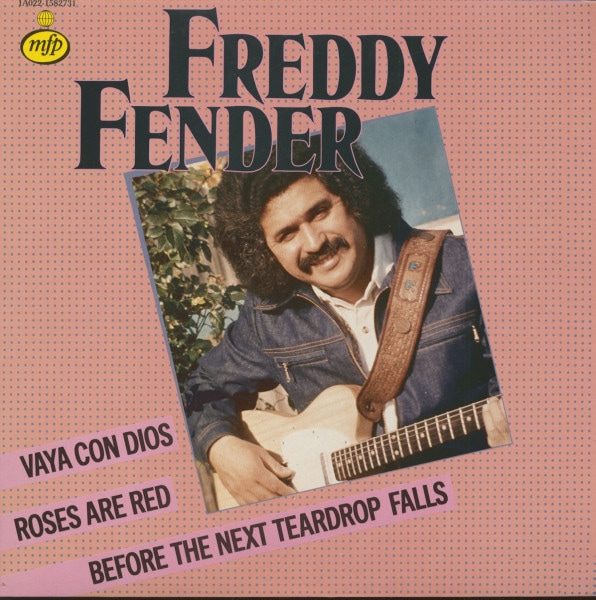 a.k.a. FReddie Or Freddy Fender American Tejano and country music star Freddy Fender is truly one of the most famous performers gracing this compi- lation. He was born Baldemar Garza Huerta on June 4, 1937 in San Benito, Texas, to Margarita Garza and Serapio Huerta. Serapio presented young Baldemar a handmade guitar he had built out of a metal sardine box when Baldemar was only five years old. At the age of 10, Baldemar made his debut radio performance on radio station KGBT in Harlingen, Texas. After dropping out of school in 1953 at the age of 16, he spent some of his teenage years with the U.S. Marine Corps, being discharged in August of 1956. Baldemar returned to Texas and started performing in juke joints, bars, nightclubs, and honky-tonks, mostly to Latino audiences.

Still performing under his original name of Baldemar Huerta, he signed a recording contract with newly launched Falcon Records out of Mission, Hidalgo County, Texas. Owner Arnaldo Ramirez, Sr. had founded the label to record Spanish language versions of popular rock and roll and pop tunes of the time. Huerta stayed with Ramirez’ label until 1959. The first releases were issued as by Baldemar Huerta con Los Romanceros, then as El Bebop Kid, and fi- nally as Freddie Fender. Huerta had actually already changed his name legally to Freddy Fender, claiming “it would sell better to Gringos!” Fender switched to Duncan Records in mid-1959, shortly af- ter the label was founded by Wayne Duncan in Harlingen. Recordings that Fender made for Duncan were released un- der various names and pseudonyms: Freddie or Freddy Fender, Eddie Medina, Scotty Wayne and Eddie con Los Shades.

Duncan managed a leasing deal with Los Angeles’ Imperial Records for several Fender recordings. Album re- leases followed on the Ideal and Norco labels out of San Benito, Texas. After Fender had scored his first hit, Wasted Days And Wasted Nights, in May of 1960, his career stopped when he and a band member got arrested for possession of marijuana in Baton Rouge, Louisiana. Three years at Louisi- ana State Penitentiary followed until he was released through an intervention by Governor Jimmie Davis, who was a singer and songwriter of You Are My Sunshine fame. The 1970s were Fender’s most successful period of his ca- reer. In 1974, his Before The Next Teardrop Falls was a #1 hit on ‘Billboard’s’ country and pop charts. Secret Love, You’ll Lose A Good Thing, and a remake of Wasted Days And Wasted Nights all reached #1 on Billboard’s country charts.

Freddy’s swamp pop country sound scored 21 country hits between 1975 and 1983. Fender formed The Texas Torna- dos together with Doug Sahm and Augie Meyers of The Sir Douglas Quintet and Flaco Jiménez in 1987, mashing their own sound out of Tejano, conjunto, rhythm and blues, coun- try, swamp, and rock and roll. Five albums and a Grammy resulted in 1990. Fender joined the next super group in the late nineties: Los Su- per 7, with David Hidalgo and César Rosas (both of Los Lobos), Flaco Jiménez, Rick Trevino, Joe Ely, and Ruben Ramos. The result was another Grammy in 1998. He cut his final recordings in early 2001 and performed his last concert on December 31, 2005. Freddy Fender died from cancer at the age of 69 at his home in Corpus Christi, Texas on October 14, 2006... 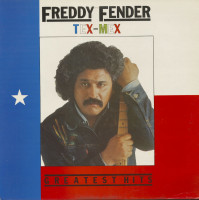 Tracklist
Fender, Freddy - Freddy Fender (LP) LP 1
01 Before The Next Teardrop Falls
02 Roses Are Red
03 Secret Love
04 Since I Met You Baby
05 Wasted Days And Wasted Nights
06 Vaya Con Dios
07 You're Turning Down The Flame Of Love Too Low
08 Wild Side Of Life
09 I Love My Rancho Grande
10 You Lose A Good Thing
11 Mathilda
12 The Rains Came