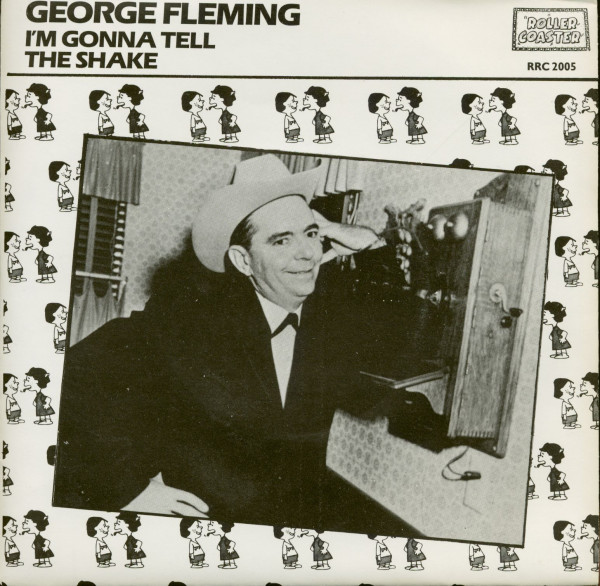 (Rollercoaster) 2 tracks - picture sleeve - small center
-
Some of the best rockabilly and rock'n'roll singers-the famous and the not so famous-have come from Texas, and George Fleming is no exception. I'm Gonna Tell and The Shake have long been collectors items, with too many collectors chasing too few copies; and following a limited quantity pressed by George in 1979, Rollercoaster are now pleased to re-release the record.

George Fleming was born in Forth Worth, Texas and lived there until he was nine years old when his family moved to nearby Dallas. At the age of ten George got his first guitar and following a stage appearance at a local theatre found the show-biz bug had bitten, but although he played many small clubs in the Dallas, Plano and McKinney area, real commercial success eluded him.

Following the release of I'm Gonna Tell, George found that his record was being played in some thirteen states but without the distribution of a major label the record faltered, as did many other deserving small label discs in the fifties. George turned to radio announcing and became a newsreader too while studying at a radio engineering school-subsequently he became a chief engineer for several small radio stations while keeping his hand in as a songwriter. Again his songs brought him some limited success, his biggest break coming when he signed with Jim Denny's Cedarwood Publishing in Nashville, Tennessee.

As George says, 'It's not all milk and honey in the music business', but he's happy to see his record released again and is hoping to record again if the circumstances are right. Meanwhile, George is happily living and working in Blossom, Texas.... (Yvonne Trengove)