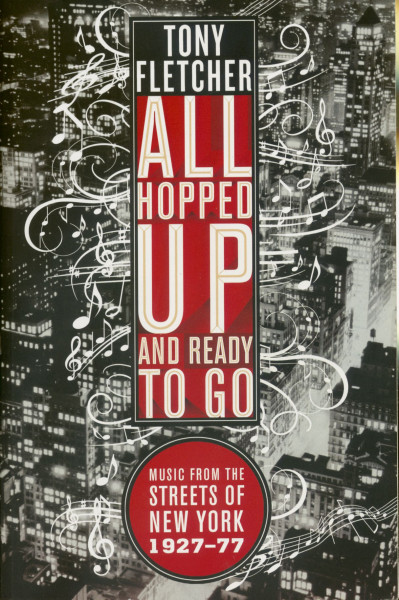 'Tony Fletcher has demonstrated extraordinary depth in his research and vibrancy in his writing. Not only was I fascinated by his stories of times and styles about which I knew little, but, in those areas in which I knew a lot, he has connected all the dots for me.... ) Oh, yeah, and it's a damned good read:'
comes an incisive history of New York's seminal music scenes, encompassing the ways in which the city's indigenous art, literature, theater, and political movements converged to create such unique sounds, as well as the music's vast contribu-tions to our culture. With great attention to the characters, from trumpet player Dizzy Gillespie to Tito Puente, Bob Dylan to the Ramones, All Hopped Up and Ready to Go takes us through bebop, the Latin music scene, the folk revival, glitter music, disco, punk, and hip-hop, as they emerged from the neighborhood streets of Harlem, the Village, Brooklyn, the Bronx, and Queens.

'A fly-on-the-wall vantage point to some of the most important musical happenings in popular history, the book is equally as good about covering the city of New York itself and how this amazing city helped influence all of this incredible music. I enjoyed this book almost as much as I originally enjoyed all the music it covered:'

'With dazzling prose and rich detail, Tony Fletcher brings to life the colorful characters, tortured geniuses, and ambitious visionaries behind a half-century of diverse music brewed in New York City.... [It is] filled with fascinating behind-the-scenes stories and astute musical descriptions that make you want to hear every single song cited in the book'
'This is the first time I have seen anyone attempt to chronicle the whole of New York's popular music, and Tony is remarkably successful in his endeavor:'

Artikeleigenschaften von Tony Fletcher: All Hopped Up and Ready to Go - Music from the Streets of New York 1927 - 1977