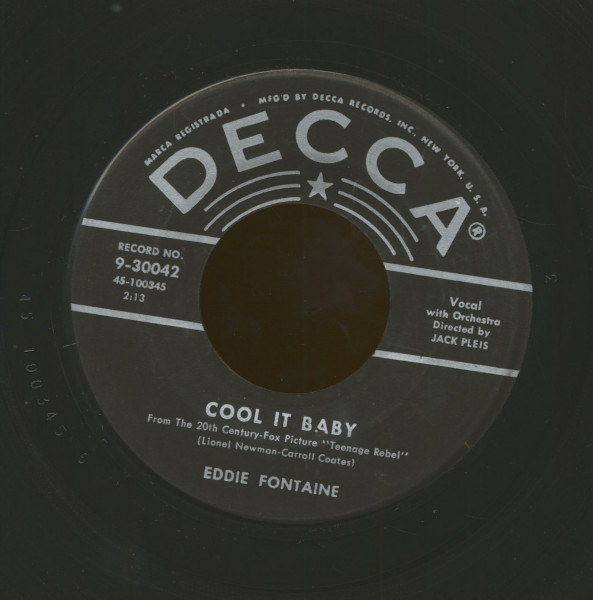 Eddie Fontaine: Cool It Baby b-w Into Each Life Some Rain Must Fall (7inch, 45rpm)

Known primarily for portraying tough guys in TV crime dramas, Eddie Fontaine also cut a slew of rockers and appeared in the seminal 1956 flick ‘The Girl Can’t Help It,’ bumping into Tom Ewell’s table while belting his Decca classic Cool It Baby.

Fontaine was born Edward Reardon in Springfield, Massachusetts on March 6, 1927 and grew up outside of New York City. RCA’s “X” subsidiary visualized Eddie as a pop cover specialist (Frankie Laine was a primary influence). He debuted in early ’55 with a rendition of Lula Reed’s Rock Love (Neal Hefti, who discovered Fontaine, led the orchestra), his “X” output also including a cover of The Marigolds’ Rollin’ Stone. Fontaine’s final “X” offering at year’s end, Boom-De-De-Boom, was written by Clyde Otis and veered closer to legit rock and roll. So did Here ‘Tis, which Fontaine wrote with R&B chanteuse Maymie Watts and had out on Vik, another RCA logo, in early ’56. Ditto his Vik encore Stand On That Rock, written by its bandleader, Joe Thomas, and its self-penned B-side Baby You Did This To Me.

Co-written by orchestra conductor Lionel Newman, Cool It Baby was Eddie’s first Decca outing that summer of ’56. It swung with a vengeance, thanks to splendid New York backing directed by Jack Pleis. Despite its prominence in ‘The Girl Can’t Help It,’ Cool It Baby didn’t crease the charts, and the same held for the rest of Fontaine’s cover-heavy Decca catalog. He turned out versions of George Hamilton IV’s A Rose And A Baby Ruth, David Houston’s One And Only, and Johnny Horton’s Honky Tonk Man. The jumping East Of The Mississippi came out in early ’57 with Danny Small’s I’ll Be There on the B-side.

Right in the midst of Fontaine’s Decca stint in late ’56 came a self-authored one-off for Charleston, South Carolina-based Jaro Records, It Ain’t Gonna Happen No More, that was as tough as anything he’d cut. Fontaine’s only Chancellor outing in the spring of ’58, Goodness, It’s Gladys!, packed a punch too. He was billed as Eddie Reardon on a raucous Brunswick single that same spring, Who Is Eddie?.

Fontaine cut two versions of his calling card Nothin’ Shakin’, another original, in the summer of ’58. The first, a demo with George Barnes on lead guitar, was steered to Chess Records by publisher Gene Goodman, but Eddie also cut it for Sunbeam. When Chess unexpectedly issued the first master on its Argo subsidiary, Fontaine had two competing versions out. The Argo one gave him his only pop chart bow that fall. More 45s for Sunbeam, Warner Bros., and Liberty followed, but Eddie mostly concentrated on acting after that. His last years were marred by serious legal problems. Fontaine died of throat cancer on April 13, 1992 in Los Angeles.