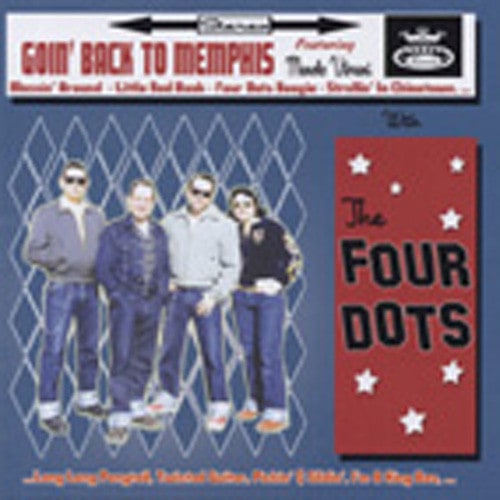 FOUR DOTS: Goin' Back To Memphis

Speaking of The Four Dots, they too were part of the Washington, D.C. vocal group axis that was thriving at the dawn of the decade. They formed around 1950, reportedly with George Harris their lead singer and Rudolph Harris their tenor. Since baritone Lawrence 'Lucky' Green and bass George Davis, Jr. are known to have departed The Four Dots to join The Heartbreakers later in 1951, let's assume they were still on hand when The Four Dots waxed their only single for Dot Records (how fitting), Randy Wood's Gallatin, Tennessee-based label.

The sweet ballad My Dear, penned by the entire group, and its opposite side, a blues-tinged revival of piano-playing bandleader Buddy Johnson's 1940 recording You Won't Let Me Go, found The Four Dots backed by The Griffin Brothers, one of Dot's mainstay R&B bands (they scored no less than five major hits in 1951, Tommy Brown and Margie Day sharing the vocal load). Trombonist Jimmy Griffin and pianist Edward 'Buddy' Griffin led their horn-leavened combo out of Norfolk, Virginia, located only a couple hundred miles from D.C. There's a piano-driven rhythm section behind the Dots on You Won't Let Me Go, but My Dear displays no audible input from the Griffins, only subtle acoustic guitar backing.

D.C. vocal group manager Lillian Claiborne had sent The Griffin Brothers Dot's way as well as sending several masters by The Cap-Tans to the label, so it's likely that she steered The Four Dots in Wood's direction as well. At least The Cap-Tans didn't have to share their name with their label the way The Four Dots did.