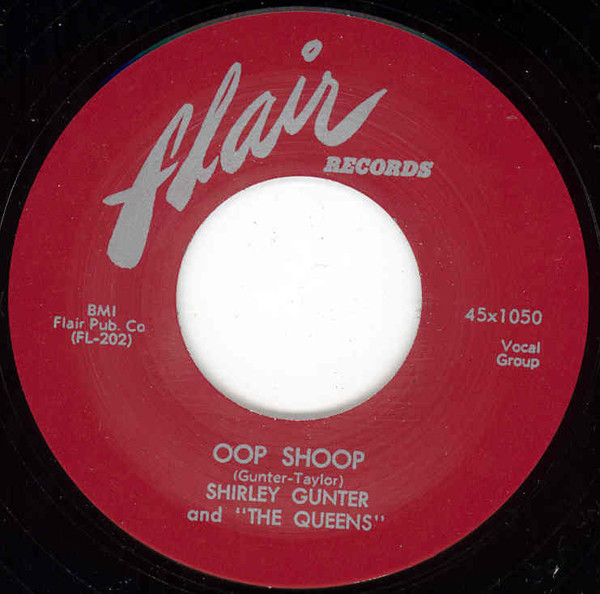 Shirley Gunter and 'The Queens'

Although this series has previously featured a female group (The Enchanters' I've Lost on our 1952 disc), the gender barrier still stood tall when Shirley Gunter and her Queens scored the first R&B hit by a distaff quartet.

Born September 29, 1934 in Coffeyville, Kansas, Gunter came from a musical brood; her mother sang on the radio, and Shirley and her sister Gloria would sometimes join her. The Gunters arrived in Los Angeles in 1942. Shirley's younger brother Cornel beat her onto wax as the lead tenor of The Flairs (see previous volume). The Flairs were recording for the Bihari brothers' Flair label when Cornel suggested the Biharis give his big sis a listen in late '53. They saw her sing at the Club Alimony, and suddenly there were two Gunters on Flair. Shirley debuted on the imprint with Send Her Back, pianist Monroe Tucker leading her combo. Saxist Maxwell Davis, the Biharis' A&R man at parent Modern Records, took over as bandleader on Shirley's '54 encore, Strange Romance.Noticing there weren't any girl groups on the scene, Gunter organized The Queens, all L.A. transplants like her. Alto Blondine Taylor, her former Polytechnic High School classmate, originally hailed from Baton Rouge. Soprano Lula Bea Kinney and her aunt, Lula Mae Suggs, who held down the middle, came from Midland, Texas. Gunter and Taylor knocked out Oop Shoop on Cornel's piano, their very first composition. Shirley brought her girls down to Modern's headquarters in Culver City, where the label had its in-house studio, in the summer of '54.

The Queens laid down the rocker with Maxwell blowing sax and Willard McDaniel massaging the 88s, cutting Shirley's swinging It's You for a flip. Flair pressed it up front-billing Shirley. Oop Shoop sailed to #8 on 'Billboard's' R&B 'Best Seller' list that autumn (a Crew Cuts cover went to #13 pop), The Queens encored with a jumping You're Mine (again by Gunter and Taylor), followed by the smooth ballad What Difference Does It Make and then a Latin-tinged That's The Way I Like It.

When Gunter's manager Buck Ram advised Shirley to resume her solo career, she obliged. Ram also handled The Flairs, so her next self-penned Flair outing in the summer of '55, Ipsy Opsie Ooh, had Cornel's crew flawlessly backing a scatting Gunter. Modern moved her to the parent logo in 1956, her four releases there commencing with Please Tell Me. Gunter's next poppish Modern offering, the Ram-penned Headin' Home, stirred up regional noise. I'm Sorry, Shirley's lastModern single, was in direct competition with The Platters' hit version.

Shirley's post-Modern discography started with a one-off for George Motola's Tender label in 1958 and closed with Stuck Up, a '65 single on Ray Charles' Tangerine label. Gunter lost her sight in the early '70s but remained active musically, both in church and at occasional oldies shows.