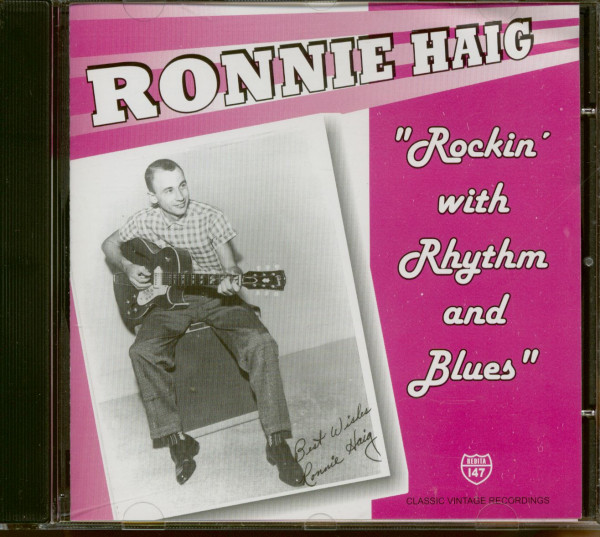 Renamed in honor of his manager's favorite Scotch, Ron Hege was living in Indianapolis when he met a white vocal group, the 5 Stars, who needed a guitarist for a record date. He was working on the Stars' Pickin' On The Wrong Chicken when their manager, Jerry Herman, offered him a deal. Haig was eighteen at that point. It seems likely that Don't You Hear Me Calling, Baby was recorded that same night. #

Mel and Jerry Herman owned Note Records and issued the 5 Stars' record and Ron's record on February 13, 1958. Both were among the first records to feature jazz guitar genius Wes Montgomery, who paid the rent working sessions for Note while awaiting his big break. The backing was led by journeyman jazz/R&B saxophonist Jimmy Coe, who'd first recorded with Jay McShann as far back as 1942.

Coe told researcher Dan Kochakian that he recorded once a month for Note and wrote the arrangements for Hege's session. The next Ron knew, he was on ABC. "I saw it at a local distributor on ABC," he told Larry Stidom at 'Discoveries' magazine, "but I didn't ask questions. To this day, I don't know the details." The record did well locally, but didn't break nationally.

Ron ordered a lavender Thunderbird in anticipation of the first royalty check, but eventually had to tell the dealer that he'd lost the sale. He toured locally, worked with a black vocal group, the Students, whose Note record was leased to Chess/Checker, and then joined the Army. After his discharge, he signed on with Prudential Insurance as a salesman.

Lucky to get this one - thanks to Bear family!! Ronnie Haig, never a rock 'n' roll superstar but he should have been! Here lies a fantastic set of his early Note singles (and some later releases as well) which sound great - that's what you expect from Bear.

I'd grab this while you can as it appears this Redita release is in short / limited supply. If you like Rock 'n' roll the way it should sound, this 25 tracker is a no-brainer.