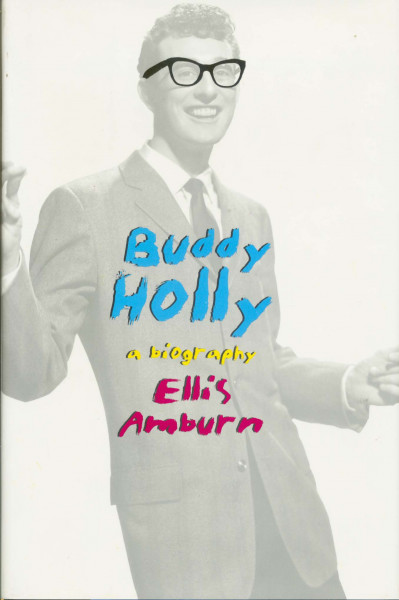 
The tragic, bittersweet story of the founder of American rock 'n' roll and one of America's greatest rock heroes

"This is the comprehensive book all Buddy Holly fans have been waiting for. It brings Buddy into hard focus with in-depth interviews with family and friends. 'Oh Boy'!" —DON MCLEAN, singer/songwriter of "American Pie"

In Buddy Holly, best-selling biographer Ellis Amburn brings this musical genius, this flam-boyantWest Texas rebel, back to life. Having interviewed over two hundred people, Ellis Amburn has written the most revealing and definitive biography of Holly's life. The result is a triumphant American work.

"While reading Buddy Holly, I began to realize just how long I'd been waiting for the book. It adds flesh and bones to the legend and does justice to the man:' —GRAHAM NASH

"This book brings back to life our beloved Buddy Holly, a part-Cherokee Texan who allowed us to feel cool and tingle with sexual excitement as we cruised Route 66 listening to his serenades!' —MICHAEL WALLIS, author of Route 66

At lost, the real story of Buddy Holly that could never be told before—a major work by a best-selling biographer

He was born on the plains of West Texas in 1936, the son of deeply religious folks impoverished by the Depression. As with Hank Williams, his genius came early: He won a singing contest at the age of five, and by the time he was in his teens, he was a sen-sation at Lubbock Senior High School with his own radio show. Here, in Buddy Holly, Ellis Amburn, the biographer of Janis Joplin and Roy Orbison, presents the most comprehensive biography ever written about this legendary figure, a young man who transformed the course of American music with his shocking blend of country and western and rhythm 'n' blues. Having devoted the last five years of his life to this work—crisscrossing the rural paths of the United States from Texas to Iowa to Minnesota—Amburn portrays Holly as a mythic antihero, whose rebellious, dramatic life was a reaction against the constricting val-ues of America in the 1950s, when his music was regarded as the work of the devil. From his wild days as a juvenile delinquent, to his first romances, to his early associations with then virtually unknown singers like Elvis Presley and Waylon Jennings, Holly emerges as a deeply tortured, driven individual and a bril-liantly talented young man in a hurry to make it as a star.

Among the stories that Amburn discusses are: the making of the band that would be known as the Crickets, including the recollec-tions of two former members of the group; the way in which Holly and his group were ripped off by producer Norman Petty ; the har-rowing travel conditions endured during the "Winter Dance Party" tour; and the never-before-told story of Holly's marriage to Maria Elena, whom Amburn interviewed about the couple's early days in Greenwich Village. Holly fans will discover the true stories behind some of rock's greatest anthems, including "That'll Be the Day" and "Peggy Sue," as well as what really happened on that final flight on February 3, 1959, "the day the music died." Amburn has interviewed several hundred people—survivors of the great, early era of rock 'n' roll, people like the real "Peggy Sue" and Sonny Curtis—and this enduring biogra-phy, the most complete to date, takes its place among such best-selling works as No One Here Gets Out Alive and Elvis and Me, on which Amburn collaborated with Priscilla Presley. Buddy Holly is a haunting portrait of a man who inspired dream and legend—wistful memories of whom return us to a seemingly more inno-cent age nearly forty years ago.

ELLIS AMBURN, raised in Texas, is the author of Pearl: The Obsessions and Passions of Janis Joplin and Dark Star: The Roy Orbison Story. A former book editor and noted biographer, he makes his home in Key West, Florida.
Jacket design by L2 Jacket art courtesy of Archive Photos