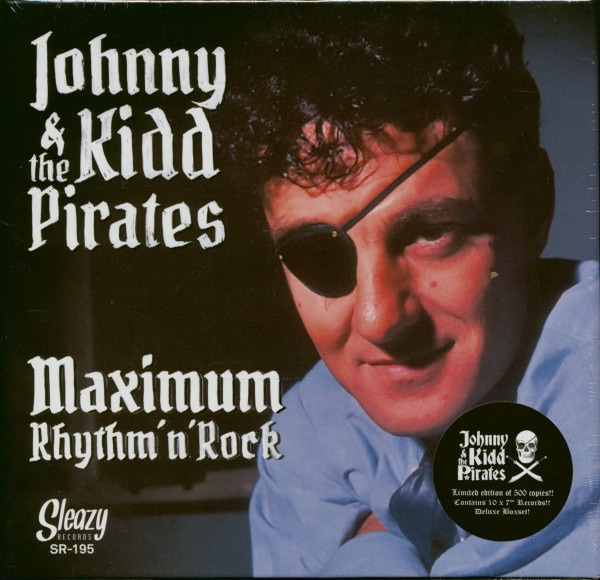 Side A:
Please Don't Touch / Growl
Side B:
Feelin' / You Got What It Takes

Side A:
Longin' Lips / Shakin All Over
Side B:
Restless / Magic Of Love

Side A:
Big Blonde Baby / Weep No More My Baby
Side B:
Bad Case of Love / More Of The Same.

Side A:
So What / Please Don't Bring Me Down (2nd Version, stereo master)
Side B:
I Want That / Hurry On Back To Love

THE PIRATES
Side A:
Popeye
Side B:
Spanish Armada

Side A:
Some Other Guy / Hungry For Love
Side B:
Then I Got Everything / I'll Never Get Over You

Side A:
Doctor Feelgood / Ectasy
Side B:
Jealous Girl / I Know

Side A:
Don't Make The Same Mistake I Did / Send Me That Girl
(1st version, original take without orchestra overdubs)
Side B:
It's Got To Be You / I Hate Gettin' Up In The Moring (1st version)

THE PIRATES
Side A:
My Babe
Side B:
Castin' My Spell.

Johnny Kidd was born Frederick Heath in London on Dec. 23, 1939, and has become something of a legend. At the end of the Fifties he and his band, the Pirates, featuring guitar-ist Mick Green, developed a form of R&B which stood in direct contrast to the careful cover jobs and polite rock of so many British artists, and predated the R&B revival by two or three years.

This reputation exceeds Kidd's actual chart successes —four British Top Twenty entries and no impression whatso-ever in America. But his first hit, `Shakin' All Over' (re-leased on HMV and co-written by Kidd and his manager, Gus Robinson) is now a rock standard; he followed it in the same year, 1960, with 'Restless' and in 1963 scored with `I'll Never Get Over You' and 'Hungry For Love'.

'Please Don't Touch' is another Kidd classic; his stage style, corn plete with gimmick eye-patch, is indicated by these titles. Tragically, Kidd couldn't climb back to the top when  R&B arrived in force, in spite of his 1963 success. His later recordings were heavily Beatle-influenced, and by the time of his death in a Lancashire car crash on Oct. 7, 1966, the Pirates had been reduced to low-priced support gigs.