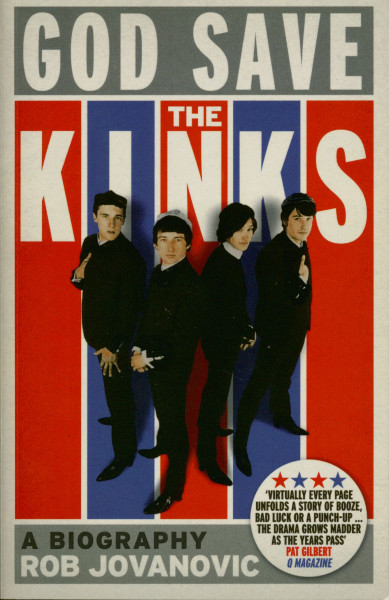 The Kinks: God Save The Kinks - A Biography by Rob Jovanovic

In August 1964 The Kinks released their third single. After a little noticed debut and a follow-up that had failed to chart at all, Pye Records were threatening to annul the group’s contract. But with its unforgettable distorted guitar riff, “You Really Got Me” went on to reach No.1, entering the US Top Ten later the same year. Followed by a string of hits, it marked the breakthrough of one of Britain’s most innovative and influential bands, and a turning point in the fortunes of two brothers whose troubled story is as tumultuous and characterful as the music they produced: Ray and Dave Davies. Born into a deeply musical working-class family in London’s Muswell Hill, Ray and Dave grew up in a city recovering from the bombs and privations of the Second World War, and, more than any other musicians of the Sixties, they crafted the soundtrack that made it swing again. In songs such as “Dedicated Follower of Fashion”, “Sunny Afternoon” – which toppled The Beatles to become the hit of Summer 1966 – “Waterloo Sunset”, “Days” and “Lola”, they drew on music hall, folk and rhythm and blues to craft a peculiarly English pop idiom, inspiring generations of songwriters from David Bowie to Jarvis Cocker and Damon Albarn. Pocked by sibling rivalry, furious on-stage violence, walkouts, overdoses, a career-throttling ban from the US, gross self-indulgence, and the band's curious rebirth as Eighties stadium rockers, the story laid bare in God Save The Kinks is one of the greatest in British pop history.

Artikeleigenschaften von The Kinks: God Save The Kinks - A Biography by Rob Jovanovic