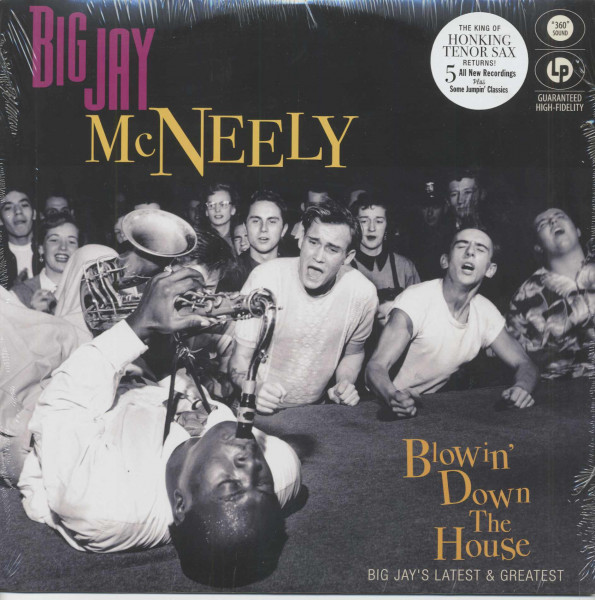 We last encountered Big Jay McNeely ten years earlier in 1949 when he was honking and squealing his way through Deacon’s Hop. Although his muscular saxophonics had laid the groundwork for rock ‘n’ roll, Jay was sidelined during rock’s early days, and found himself confined to multi-artist tours and club work. He didn’t record at all from 1956 until he cut this. By the time he re-entered the studio, he’d hired Lloyd Price’s former valet, Little Sonny Warner, as a singer. Warner was from Falls Church, Virginia (born October 30, 1930) and began his career imitating Ray Charles. He met McNeely around 1955, and joined him soon thereafter. “Jay bought that song [‘There Is Something On Your Mind’] outright for about $85,” Warner told Dan Kochakian, although when McNeely talked to Bill Millar, he set the price at twenty-five dollars. “[Turner] Rocky Wilson, who sang with the Rivingtons, wrote the song,” said Warner. “Rocky was going with a girl who left him, and he got on the junk and wrote it.” According to McNeely, “Rocky liked Fats Domino and had the tune going like Fats.

I told him, ‘What you need to do is cut everything in half,’ and I slowed everything down and rearranged it. I knew it was gonna be a hit. I wanted to record it with Rocky, but he wanted to get back down South…We recorded it in a guy’s basement after we got off work one night…I told Sonny, ‘Sing the song exactly like it is on Rocky’s tape, no Ray Charles or nothing.’” According to Warner, “We cut it in a basement studio in Seattle in 1957. Tom Ogilvy [who later owned Seafair and Bolo Records in the northwest] arranged for us to do that.

The first time, Jay had it like Fats Domino…but Jay said, ‘You keep trying to find a way to sing it.’ Jay took the song to Hunter Hancock in Los Angeles.” Writing to the Doo-Wop Society of Southern California in 1988, Hancock said, “In 1959 my business partner, Roger Davenport, and I started our own record label, Swingin' Records. Our first release was a homemade tape that Big Jay McNeely, the great saxophonist, brought me called 'There Is Something On Your Mind.’ It was a huge hit for us.“ Indeed it was. According to Warner, Hunter Hancock played the song incessantly, and it became a Top 5 R&B hit and a Top 50 pop hit. Just as it was breaking, Warner was busted for marijuana possession, and remembered hearing the record on the prison sound system. The song, of course, had legs, and became an even bigger hit the following year for Bobby Marchan, and a hit again for Baby Ray in 1966. As a postscript, it appears that Rocky Wilson wrote the song in an apartment belonging to Jacqueline Baldain aka Jackie Day. When she heard the record over the air, she wrote to McNeely asking him where and how he’d acquired it. They corresponded back and forth and married in 1960.