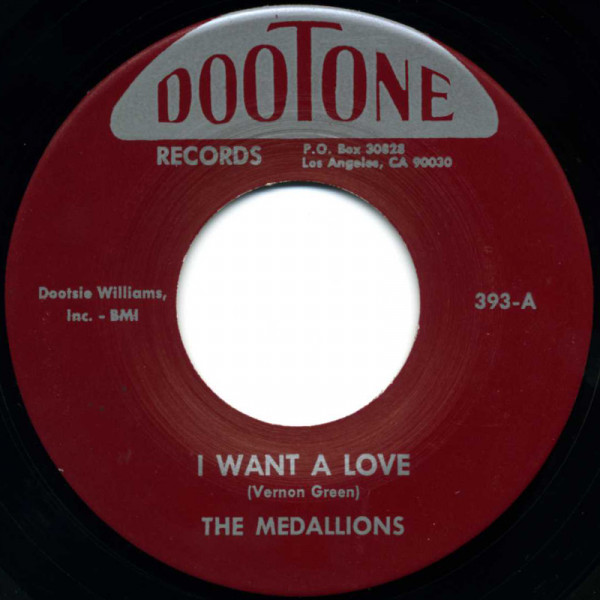 Erfahre mehr über Medallions
The Medallions The Letter The rules had changed since the days of The Ravens and... mehr
Menü schließen
"Medallions"

The rules had changed since the days of The Ravens and Orioles, much less The Ink Spots. Some young groups held their harmonic ambitions to a minimum, emphasizing the message and the beat. One of those loose-limbed crews was the Los Angeles-based Medallions.

Lead tenor Vernon Green, born May 1, 1937 in Dallas, Texas or Denver, Colorado, had been a polio victim as a youth (he sometimes brought a cane with him onstage). The Medallions were rounded out by tenors Randolph Bryant and Willie Graham, baritone Rudolph Brown, and a bass singer only remembered as Chuck. They auditioned for DooTone Records boss Dootsie Williams in June of '54 after having formed earlier that year. Dootsie shepherded the teenagers into Ted Brinson's garage studio to cut the careening Buick 59 (a simplification of Todd Rhodes' jump blues Rocket 69) featuring the guys' humorous automotive sound effects, and a dreamy ballad, The Letter. Pianist Andrew Blue provided accompaniment on both.

Much of The Letter was a romantic recitation by Green, laid over The Medallions' rudimentary harmonies and a few flowery terms that Vernon invented for the occasion. Issued that July, both sides were hits in several cities besides their hometown but didn't break nationally. Tenor Donald Woods and bass Ira Foley replaced Rudolph and Chuck for their DooTone encore date that fall. Green closely followed the formula of their debut on The Telegram, a sequel to The Letter, while Coupe De Ville Baby kept the car motif intact.

By the time DooTone issued their third offering in May of '55, coupling the Bryant-led ballad Edna and another automotive anthem, Speedin', the group had mutinied, leaving Green to form The Bel-Aires and record for Max Feirtag's Flip label with Woods their lead (they changed their billing to The Vel-Aires that summer for Death Of An Angel). Green carried on, pulling together various permutations of the group to record for DooTone except for a brief hiatus when he defected to Specialty in 1956, cutting Sweet Breeze with The Phantoms. One Medallions single on DooTone a few months earlier, I Want A Love, didn't have Green on it.

But Vernon was back with them for 1956's Push Button Automobile at DooTone. He just wouldn't let go of the car concept: Vernon Green and The Medallions, as they were then billed, released 59 Volvo in (you guessed it) 1959. Although an auto accident severely damaged his face in 1965 (ironic in a macabre way, eh?), Green came back to make a '67 single with yet another incarnation of Medallions for Minit and came full circle in '73, recording anew for DooTone. Vernon died December 24, 2000 after suffering a stroke.