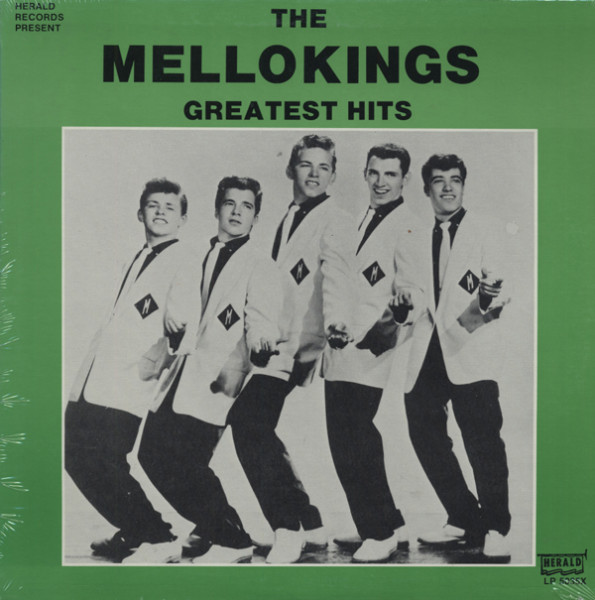 (Relic) 18 tracks
-
Certainly one of the most consistent popular oldies record over the years has been The Mellokings' 'Tonite Tonite.' Strangely enough, the song was not a hit when released (except in certain regions)
nor does it seem to have ever been a staple of street corner groups. In spite of this, it is usually in the Top 5 of most oldies surveys.
The group responsible for this enigma was from Mount Vernon, New York. In 1956, they got together as a result of try-outs for a version of 'South Pacific,' being held at Washington High School. Arranger Dick Levister liked the way some of the hopefuls sounded and formed them into a group, initially known as The Mellotones. The members at the time were: Jerry Scholl (lead), Robert Scholl (tenor), Eddie Quinn (second tenor), Neil Arena (baritone) and Larry Esposito (bass).

One night they were appearing at an amateur show, when they met a songwriter named Joe (whose last name has long since been forgotten). He promised to arrange an audition for them, if they would reciprocate by using it to sing one of his songs. When they agreed, he brought them to Al Silver, owner of Herald and Ember Records. Silver was taken with the group and signed them on the spot (although he hated Joe's tune). Billy Myles (most widely known for his recordings of 'The Joker') was a staff songwriter for Herald/Ember. He auditioned three or four songs for the guys. The only one they liked was 'Tonite Tonite,' which they took home, rehearsed, and then brought the finished vocal back to Silver a week later, who said 'Let's go into the studio immediately and cut it.' From the time they first auditioned for Herald, it was less than a month later that the finished record was on the market.

After about a thousand copies had been pressed, everyone discovered that there was another Mellotones group around, with a record on the charts. A quick name change was in order and the 'Mellokings' were born. (The 'King' part came from Dick Levister's middle name.) The record, although it has sold over 2.5 million copies to date, never made it past number 87 on the national charts for 1957, hardly qualifying for hit status. In fact, everything happened so fast (or so slow) that the group never even realized that they had a hit. With the success of TONITE TONITE, the group went on the road doing one-nighters, sometimes for as long as three months at a time. Jerry Scholl, being of small stature, used to sleep in the luggage rack above the seats. On one tour, his 'rack-mate' was Paul Anka.

At their second session, the group cut 'Sassafras,' a Bob Crewe composition. It, as well as all subsequent releases, did not do well on the charts. Since they had a ballad on the market, The Mellokings felt that it was wrong for Herald to have pushed 'Sassafras' as their next release. In all the time they were with Herald, they never cut anything they wanted to cut. When asked the reason why none of their subsequent recordings went high on the charts, Jerry Scholl said, 'Just the way the business was run in those days. The capital wasn't there. I think Herald wanted to back up TONITE TONITE with as big a hit but just didn't have the resources. Distribution was a big problem. You were trying to go up against the big companies. Here we were, a little operation. You had to hire peddlers in the street to run around with the record trying to break it in small towns and then start all over again. That was the difficulty in those days.

' However, Al Silver is remembered fondly by the group. He constantly had recording sessions for them. Unlike most record companies of the day, Herald stood behind its artists with as much promotion and financing as possible. The Mellokings appeared on the Dick Clark Show with every new release and did hundreds of radio programs. Jerry recalls doing the Clark Show at the time of their fourth or fifth release (just after 'Tonite Tonite' was re-released) and Clark would not let them do the new song. They had to do 'Tonite Tonite' as it was then the #1 record in Philadelphia. When The Mellokings first started, the Rhythm 'n' Blues/Rock 'n' Roll field was dominated by black groups. The Mellokings, therefore, played in tours where all the other groups (as well as most of the audience) were black.

They played the Apollo four or five times, as well as the Howard, Regal, and Earl Theaters. They watched the other groups dance and with the help of manager/arranger Dick Levister, (who was black) taught themselves the choreography needed to impress their fans. Shortly after the release of VALERIE (written by Paul Evans of 'Seven Little Girls' fame), Neil Arena and Larry Esposito left, to be replaced by Louis Janacone and Tony Pinto. Subsequently, Bobby Scholl was drafted and Eddie Quinn, the only songwriter in the group, left to pursue a solo singing and songwriting career. With changes in personnel, The Mellokings have been performing non-stop since the 'Tonite Tonite' days. Today, the group is led by Jerry Scholl, who took over lead chores after the unfortunate drowning of his brother in 1975.
Eddie Quinn is a hotel manager in Las Vegas, Nevada; Neil Arena is an insurance agent; and Larry Esposito is in the construction business. (Marcia Vance - Marv Goldberg)