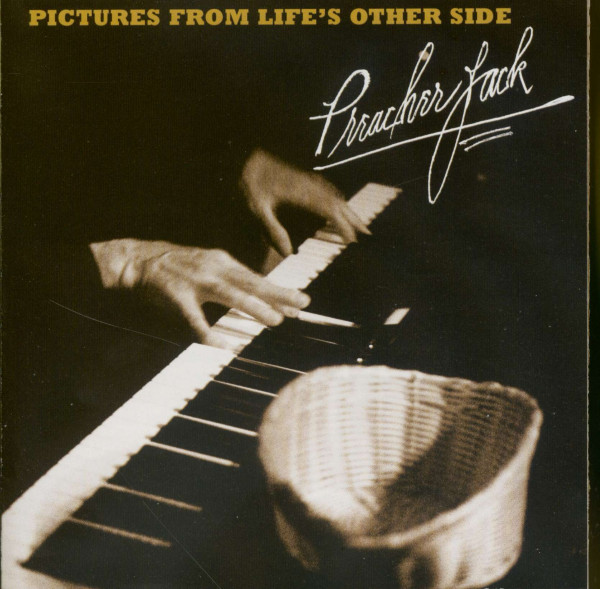 PREACHER JACK: Pictures From Life's Other Side (CD)

(2007/COW ISLAND) 18 tracks, Boogie Woogie and Rock'n'Roll played on the piano without a back-up band, recorded 1982 & 1996! Contains a nice and very informative booklet with photos. One of today's best Boogie Woogie piano players!

'I love Preacher Jack! He's a rock and roll savior with a boogie woogie pulse and a heart of gold. His Bible is the rock'n'roll (and country music) ultimate fake book and after hearing this man play, you will believe! Yes siree, you will believe!' -Nate Gibson

Preacher Jack often assures his listeners that he's 'having your nervous breakdown for you.' Then he laughs his wild laugh, and we laugh with him. But like so many of the Preacher's extravagant pronouncements, it's true: during the most difficult period of my life, the main thing that kept me sane was knowing that every Thursday night I could sit for four hours and watch him tear my world apart and put it back together.


Jack is one of the great contemporary boogie-woogie pianists and a raw, passionate singer, but above all he is a barroom preacher, saving — or at least salving — our souls with his music, his fiery sermons, and most of all, his searing, unquenchable honesty. Whether he is sing-ing the honky-tonk poetry of Hank Williams, the rowdy rock of Jerry Lee Lewis, or the majestic gospel of Mahalia Jackson, he obviously means every word. For better or worse, he has been 'living the life he sings about in his song' through five decades and at least 3,000 barrooms

The pe ormances on is uisc are an admi-rable addition to the Preacher's recorded testament. I especially love the later session, with his introductions reminding us that even as he is conveying universal emotions, the songs also have intimate connections to his own life, and that even while recording for posterity he was intensely in the moment — in this case, September 17, 1996, the 73rd anniversary of Hank Williams' birth. It was a fitting present for the greatest of honky-tonk bards, and now for all of us. -- Elijah Wald


'Preacher Jack is the purest kind of artist. He sings from his heart and his soul, and there is no one else quite like him.' - Henry Horenstein

'Every time I see Jack perform, I'm never quite sure if he is playing the piano ...or, if the piano is playing him.' - Alan Joseph

'Brother Jack is blessed with a unique and extraordinary gift. Don't pass up an opportunity to be a part of his 'congregation.- - Jeff Simon

Artikeleigenschaften von PREACHER JACK: Pictures From Life's Other Side (CD)

15,55 €
Pictures From Life's Other Side (CD)
Tracklist
Preacher Jack - Pictures From Life's Other Side (CD) CD 1
01 I'm In Love Again
02 Good Rockin' Tonight
03 Me And Bobby McGee
04 After Hours
05 Don't Be Cruel
06 You Win Again
07 I'm Counting On You
08 Will The Circle Be Unbroken
09 Testin' Out The Boogie
10 Introduction To The Session
11 I Could Never Be Ashamed Of You
12 When You're Tired Of Breaking Other Hearts
13 Mind Your Own Business
14 Blueberry Hill
15 I'll Make It All Up To You
16 Too Many Parties And Too Many Pals
17 In The Upper Room
18 I'm Going To Live The Life I Sing About In My
Funktionale