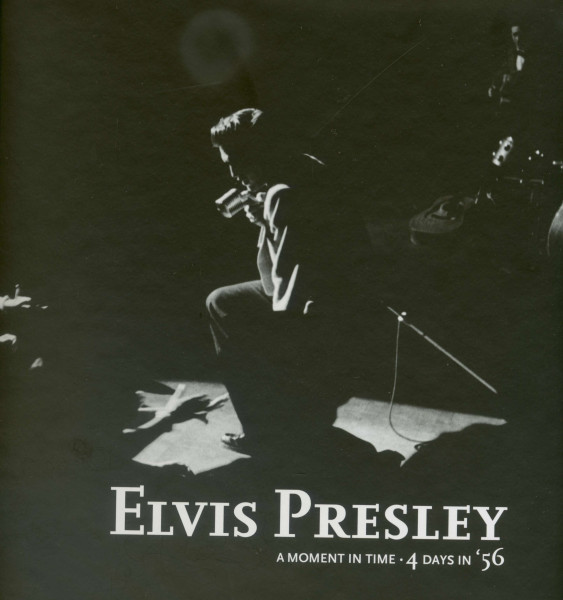 (2011/Follow That  Dream) Hardback, 24.5x24.5cm, 190 pages, a photo book (b&w) by Michael Rose. many unpublished!
Aus dieser Sammlung stammt u.a. das Cover für die 'Young Man With The Big Beat' RCA Box. Ein tolles Buch mit unglaublich seltenen Fotos von Michael Rose, im Vetrieb von Follow That Dream!*****
-
While producing a documentary about Elvis' early years, "Elvis: Return to Tupelo," I discovered a cache of never before seen Elvis photos from his late spring tour in 1956. These remarkable photos show the singer as he was just on the cusp of becoming a star. They're wonderful candid shots of him performing, meeting his fans, relaxing between shows at a local arcade and at home with his family in Memphis. It was too late to include them in my documentary but I thought they were great. I shared them with a somewhat skeptical Ernst Jorgensen who I think has seen every Elvis photo ever shot.
-
'In the 20 years I have been privileged to work with Elvis Presley CDs and books there have been a number of great discoveries. One was when I was approached by Michael Rose, who said that he had found a treasure of photos from 1956. I have been bombarded with stories that were simply too good to be true, and in many cases, that's exactly what they were. So with some hesita-tion I asked Michael to send me some samples, and I was absolutely not prepared for the quantity and quality of these historic images. It was one of these situations where you forget all about financial logic, and just KNOW that this has to be shared with all the fans. Since Michael agreed wholeheartedly, we have spent the last 12 months sorting through all the material.
I hope the fans love the images and the story as much as I do.' - Ernst Jorgensen

Artikeleigenschaften von Elvis Presley: A Moment In Time - 4 Days In '56