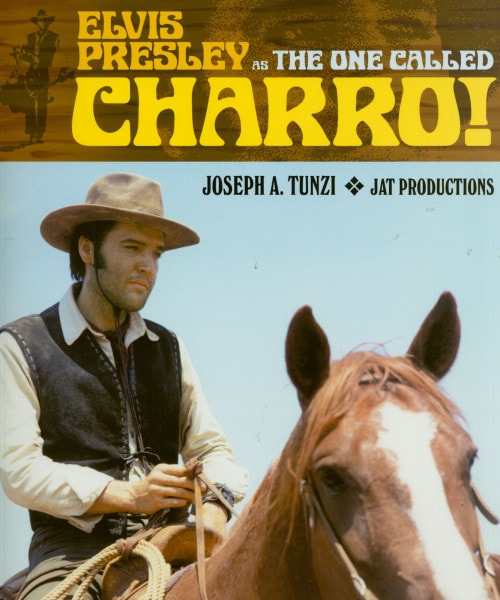 The Making of CHARRO! and Selected Interviews
By Bill Bram

Filming for Charro! commenced on July 22 and was completed on August 28, 1968. Exteriors were shot at the Apacheland Movie Ranch1 in Apache Junction, AZ. Interior sequences, such as the sheriff's office, the saloon and bedroom scenes, were filmed at what was then known as United Artists Studios.2 This was the third and last film Elvis would do at this Hollywood studio. The other two films he shot here were: Kid Galahad and Frankie and Johnny.
While in Arizona the cast and crew stayed at the Superstition Inn. Elvis, his father Vemon, and the rest of his cronies stayed on the second floor. Colonel Parker, stayed in the hotel as well - at least for part of the filming. The director and writer, Charles Marquis Warren, watched dailies at the hotel, probably in one of the convention halls. Fans would hang out at the hotel in hopes of getting a glimpse of Elvis. Towards the end of location work, Elvis held an impromptu concert in the hotel bar for the movie company. He reportedly sang for well over an hour. In addition, when filming wrapped at the studio, a wrap party was held - and again Elvis performed, probably on one of the sets for the film.

Charles Marquis Warren thought, after he had first heard Elvis sing in the fifties, that "he was a negro . . . the bits and pieces I heard him sing, he sounded like one." When National General, the movie company that financed the picture, told Warren that Elvis had read his script, liked it and wanted to play the lead role, Warren was aghast. The people at National General urged Warren to, "Just meet him, maybe you'll change your mind." They were right. Elvis and Warren met, for the first time, at a restaurant next to United Artists Studios called The Formosa. To quote Warren, "I liked him a lot . . . we didn't fall in love. He wanted to hear what I had to say. I wanted to hear what he had to say." After lunch Warren took Elvis to Western Costume Company to try on some cowboy clothes. Warren picked out "a bunch of crummy clothes . . . a worn out shirt and pants, scuffed boots and a beaten up hat." Elvis looked in the four way mirror and said in his typical modest way, "I like it, it it's all right with you." Warren thought Elvis looked great. Warren decided to put a beard on Elvis, to make him look more like a tough Western hero, but Elvis's new look didn't quite work; to quote Warren, "he looked like Jesus Christ."...