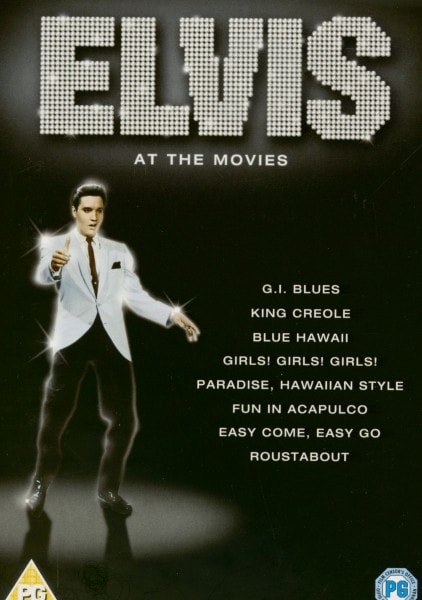 G.I. Blues
The year was 1960. A payola scandal shocks the music world. Movie fans are introduced to glorious Smell- 0 - Vision. The 50-star flag is adopted. And in G.I. Blues, Elvis adopts an on-screen persona he knows well in real life–a singin' G.I. in West Germany. Eager to open a stateside nightclub after his hitch in khakis, he takes part in a wager to raise the dough he needs. The bet: he can melt the iceberg heart of a willowy dancer (Juliet Prowse). But all bets may be off when real love intervenes...

King Creole
The year was 1958. Everybody's datin' at the drive-in. America launches its first satellite. The novel Lolita stirs up controversy. And Elvis Presley gives Bourbon Street a new beat in King Creole. He plays a troubled youth whose singing sets the French Quarter rockin'. With a sweet girl to love him and night clubbers cheering, it looks like Elvis will shake off his past and head for the top. But will a mobster (Walter Matthau) and his man-trap moll (Carolyn Jones) snare him in a life of crime?

Blue Hawaii
The year was 1961. Fallout shelters dot suburban backyards. Ken joins Barbie. Roger Maris slugs 61 home runs. And Elvis Presley is in paradise, playing an ex-G.I. who comes home to Blue Hawaii. His mother (Angela Lansbury) expects him to climb the corporate ladder. But Elvis would rather wear an aloha shirt than a white collar, so he goes to work as a tour guide. Lucky Elvis: his first customers are a car full of cuties. Elvis, lovely scenery, lovelier girls and rock-a-hula songs—now that's paradise!

Girls! Girls! Girls!
The year was 1962 Teens twist at the Peppermint Lounge. John Glenn orbits Earth. Wilt Chamberlain scores 100 points in a single game. And Elvis digs the possibilities of Girls! Girls! Girls! This time he's a charter-boat skipper who helps tourists land the big ones. Of course, plenty of beautiful girls (including Stella Stevens) want to land Elvis. But there's something Elvis likes almost as much as romance - a boat! He yearns for a sleek sailboat with a $10,000 price tag. Let's see, that makes him about $9,999 short.

Paradise, Hawaiian Style
The year was 1966. A little-known series called Star Trek.' beams up. Valley of the Dolls is the hot book. Half of all TVs sold are colour sets. And in Paradise, Hawaiian Style, Elvis takes to the skies over the island paradise of Kauai. He's a partner in a helicopter charter service. Romance, naturally, is in the air for the King...but his business may be grounded. A threatened suspension of his pilot's license means he may have to kiss his assets goodbye. Star TrekTm and related marks are trademarks of Paramount Pictures. All Rights Reserved.


Fun In Acapulco
The year was 1963. The hot line links the White House and the Kremlin. The first major pop art exhibition stirs up a major buzz. The Whisky-A-Go-Go opens. And in Fun In Acapulco, Elvis heads south of the border, where he's fired as a boat hand, hired as a lifeguard and singer, admired by local beauties (including Ursula Andress) and inspired to jump off a 136-foot cliff. Put another way: he overcomes a fear of heights in spectacular fashion. Spectacular, too, are the scenic vistas and Latin-beat tunes. Dive in!

Easy Come, Easy Go
The year was 1967. It's Packers vs. Chiefs in the first Super Bowl. Twiggy is a supermodel sensation. America's 100,000,000th telephone is installed. And Elvis dives for dollars in Easy Come, Easy Go. On his last day in the Navy, frogman Elvis discovers a sunken treasure ship. On his first day as a civilian, Elvis starts his new job – self-employed treasure hunter! Fans will dig these treasures, too: rockin' tunes, romance with a go-go dancer, underwater action, and The King twisted like a human pretzel at a groovy '60s yogafest! Co-starring Elsa Lanchester (Bride of Frankenstein(.

Roustabout
The year was 1964. The miniskirt is in. If you can't Watusi, you can't dance. Cassius Clay (soon to be Muhammad Ali) claims the heavyweight crown. And Elvis is a karate chopping biker who's hired as a carnival Roustabout. At first he just provides muscle and a diversion for the beautiful carny girls. Then he picks up a guitar and gets the midway rockin'. Looks like this talented tough guy may be what the good-hearted owner (Barbara Stanwyck) needs to save her travelling show from bankruptcy.

Contains mild sex references and violence
PARENTAL GUIDANCE: General viewing but some scenes may be unsuitable for young children.


tlISOR's\o\c, FIT FOR VIEWING GENERALLY but in the case of a child under 12 years, under j.\ PARENTAL GUIDANCE