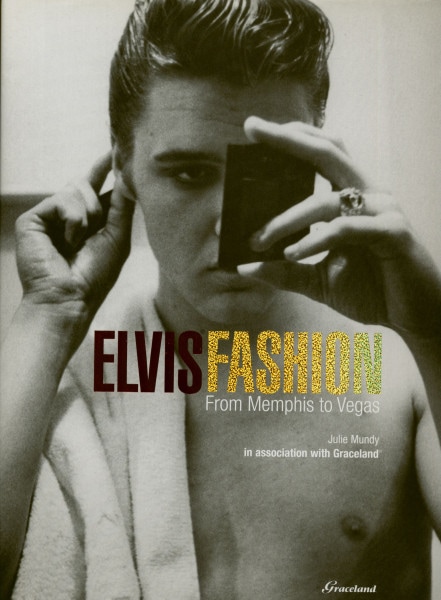 2003, English, Clothbound/Gebunden mit Schutzumschlag, 32x24 cm, 208 pages/Seiten, full color illustrations, komplett farbiger Bildband über Privat & Bühnengarderobe 1950s-1970s mit erstlassigen Fotos (teilweise ganzseitig) aus den Graceland Archiv. Ein tolles Buch! Neuware! aus Lagerbestand mit minimalen Lagerspuren am Schutzumschlag (Bear Family Records)
-
Elvis Fashion: From Memphis to Vegas - Julie Mundy in association with Graceland
'Sure, he's the King of Rock and Roll, but he could just as well be the King of Rock and Roll Style. It was Elvis, after all, who defined the two extremes of rock style. Back in the mid-50s, he laid the blueprint for the rock and roller as rebel—the black pants, the jacket, the hair, the snarl. It's an image that has survived for nearly five decades. Similarly, the after-image Elvis created in the latter half of his career, with his evermore-grand jumpsuits, continues to be a source of inspiration.'

James Henke Vice President of Exhibitions and Curatorial Affairs The Rock and Roll Hall of Fame and Museum
Elvis Fashion is the first book to document Elvis' wardrobe. FiaaturIng archival and newly commissioned photography, in addition to rare documents and sketches, it offers an unprecedented look inside Graceland's collection, taking us from the wild outfits of America's best loved teen idol to the outrageous stagewear of the world's first rock and roll superstar.

At a very young age Elvis began to turn up his collars and spend hours on his hair and, as soon as he could afford to, made his first investments in the fine tailoring of the Lansky Brothers in Memphis. As teen-idol in the 1950s, he turned to the flamboyant Nudie Cohn and, as budding star of the silver screen, to Rat Pack designer Sy Devore. In the meantime, Elvis also cultivated his own style at home, whether it was horseback riding gear for his friends, an 'EPE' foot-ball uniform, personalized karate gis, or putting his TCB (Taking Care of Business) logo on everything from sunglasses and jewelry, to the wall of his tele-vision room and the tail of his plane. When he made his retum to the stage, on Be '68 Spacial, Elvis went to Bill Belew who, among many elaborate costumes—tasseled, beaded, and embroidered with flames. dragons, and tigers—also created his most enduring image: the legendary white jumpsuit.

From primping and preening to donning the most awe-inspiring stagewear in rock and roll history, Elvis Fashion takes you on a fabulous journey with the undisputed King of Rock and Roll Style.