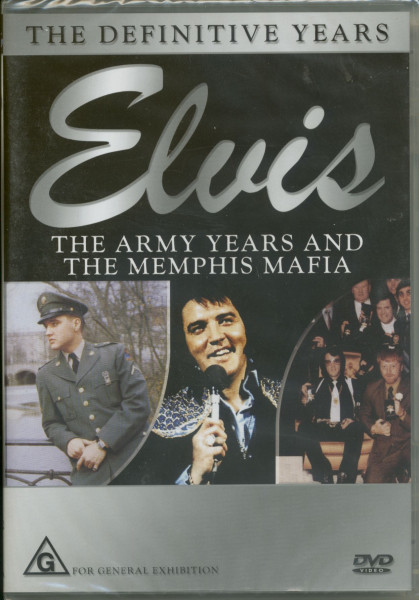 (Passport) PAL, Code 0, Color, 4:3, english, appr. 105 min. THE DEFINITIVE YEARS THE ARMY YEARS In 1958, Elvis Presley was the world's biggest entertainer GIRLS, CADILLACS, GRACELAND, movie contracts, and million dollars a year were all his for the asking... and the suddenly, it all came to a grinding halt. In THE ARMY YEARS we examine just what happened when Uncle Sam took the King of Rock 'n' Roll and made him into a buck private. You'll hear from Elvis' girlfriend ANITA WOOD about how America' foremost rebel reacted to the news that he would soon b drafted, and from his lifelong friends JOE ESPOSITO an CHARLIE HODGE about the shy young superstar they me while serving out their own two-year hitch in the U.S. ARMY You'll hear about Elvis' trips to Paris and the wild times share by him and his friends in the world famous nightclubs of that city. FROM GRACELAND TO GERMANY and back again, THE ARMY YEARS is the definitive look at the military career of Elvis. THE MEMPHIS MAFIA In the mafia there is a code of silence that is considered unbreakable... so it was with the men who surrounded Presley every minute of every day. The Memphis version c mafia was much more easygoing than the organized ( syndicates that gave them their name, but no less secretive. IT THEIR JOB TO PROTECT THE KING OF ROCK 'N' ROLL fro n various dangers that are associated with celebrity... fro n death threats, the fans, the kooks and ultimately himself. Here break that code of silence, many for the first time, and give you inside story of the man they knew as 'THE BOSS,' a man regarded them as friends and brothers. You'll hear from ESPOSITO, the so-called 'FOREMAN' whose 20-year friend with Elvis started in the army, and PATTY PARRY, a fan who become the only female member of the exclusive boys only club.