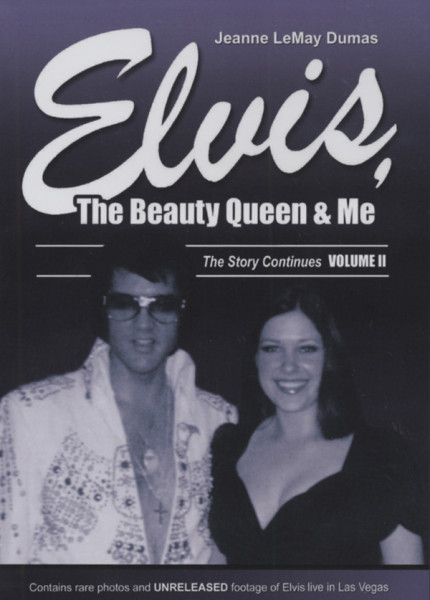 Volume II PAL, REgion 2, english, Volume II
Jeanne LeMay and Linda Thompson met in 1972 while competing in the Miss USA Pageant and quickly became friends. It was through Linda that Jeanne was able to get an insider's look at Elvis Presley's personal life. Jeanne accompanied Elvis and Linda on the tour circuit and later went to work for Elvis as one of his secretanes.
It was during a particularly snowy Christmas in 1973 that Jeanne was invited to spend an extremely memorable festive season at Graceland with Elvis and Linda. Occassionally, when Elvis was touring, Jeanne and Linda would have 'sleepovers' at Graceland. It was during one of these visits that Jeanne was able to take the much-sought-after photographs of the upstairs of Graceland,
Elvis was fond of Jeanne, buying her gifts that included a Pontiac sports car and a stunning 3 5ct cross-shaped diamond ring, to show his appreciation of her loyalty and friendship. The story of their five-year friendship has finally been put onto DVD. Shot in 2008 on location in England, Jeanne talks openly and candidly about her time with Elvis Presley.
INCLUDES ULTRA RARE FOOTAGE OF ELVIS ON STAGE IN LAS VEGAS IN 1970. 1971 AND 1972 - NEVER-BEFORE-SEEN IN SUCH HIGH QUALITY
Produced by Andrew Hearn Running Time: Aprox. 80 minutes / Full Colour 1(c) EE:UK Productions