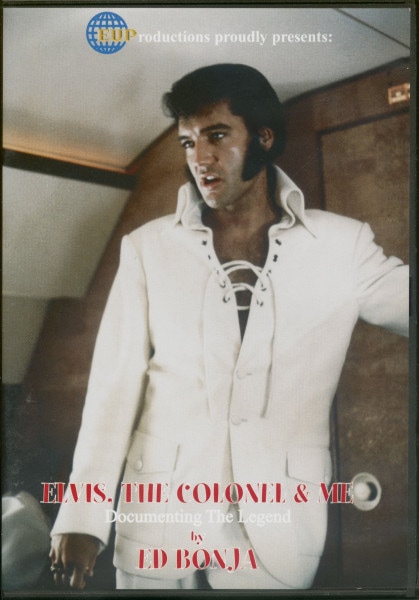 Elvis Presley: Elvis, The Colonel & Me - Documenting The Legend By Ed Bonja

All DVD systems, color, 70 min; Interviews, Film & Fotomaterial / stories, pictures and film footage - does not include any songs of Elvis Presley

I met Ed Bonja in Memphis only five or six years ago. From the first moment, I liked the man. He has a great sense of humour and is a great storyteller; but, most of all, Ed's an Elvis Fan. Ed was fortunate enough to see more than 1000 Elvis concerts while working with The Colonel and Elvis. He took thousands of pictures of the king and captured him on film at his very best. Ed also did a lot of other things on the tours, in Las Vegas and Lake Tahoe. In this documentary, you will hear a lot of stories, see a lot of pictures and film footage — much of which is released here for the first time. For the most part, it's behind the scenes and memories of the greatest Entertainer ever and his legendary manager. Enjoy!