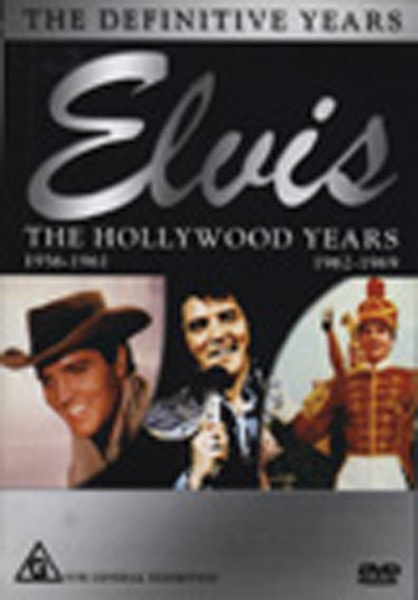 The Hollywood Years
1956-1961
LOVE ME TENDER... JAILHOUSE ROCK... KING CREOLE... BLUE HAWAII... These are just a few of the classic Elvis films you'll encounter in this extraordinary look behind the scenes at Presley's early pictures. Learn the story behind the landmark lailhouse Rock dance number. Hear previously untold stories from the producers, directors and costars who were right there on the set. See memorable clips and rare photographs from these early classics. Be there as Elvis gets his best acting notices ever, only to put his promising career on hold when he's drafted. And share Elvis' triumphant return to Hollywood for G.l. BLUES and BLUE HAWAII. Film clips from all Elvis' films are represented in this program as well as those he almost got to star in: THE RAINMAKER, WEST SIDE STORY

1962 - 1969
BLUE HAWAII set the tone for many frothy, featherweight films to come, pushing Elvis' hopes of becoming a legitimate dramatic actor further away. But the talented people who worked on those lightweight flicks still have fabulous, behind-the-scenes stories and insight to share, including costars DEBORAH WALLEY, SHEREE NORTH, BILLY BARTY, STELLA STEVENS, DIANE McBAIN, MARY ANN MOBLEY, CELESTE YARNALL, and Elvis' sexy VIVA LAS VEGAS sweetheart, ANN-MARGRET. You'll also see marvelous musical clips and rare photos from such memorable movies as FOLLOW THAT DREAM, FUN IN ACAPULCO, THE TROUBLE WITH GIRLS, and CHANGE OF HABIT. And you'll learn the truth behind the film that would've changed the course of Elvis' motion picture career; the BARBRA STREISAND version of A STAR IS BORN.