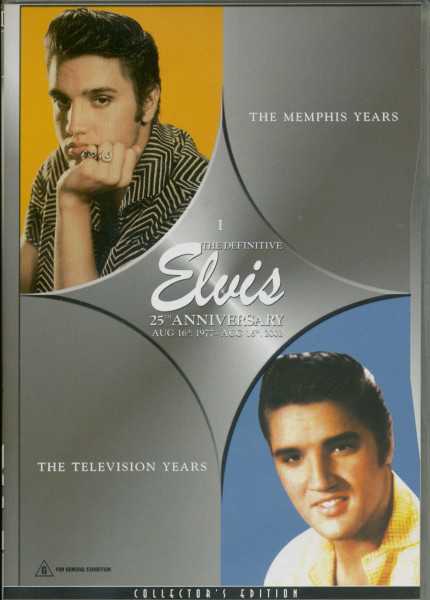 (Passport) PAL, Code 0, Color, Stereo, 4:3, english, appr. 105 min.
The Definitive Elvis - 25th Anniversary The Memphis Years In The Memphis Years, you'll see the shy young man who would emerge as the most celebrated performer the world has ever known. From his birth in a two-room shotgun shack and his days as a high school outcast to his emergence as the most powerful cultural force of the twentieth century, you'll get the complete story of Elvis Presley's formative years as well as his early days as the King of Rock 'n' Roll. You'll see rare interviews with those who knew him best, including high school friends BUZZY FORBES and GEORGE KLEIN, and his high school sweetheart DIXIE LOCKE-EMMONS who shares her remembrances here for the first time. The Memphis Years is a look back at the times and places in which Elvis Presley lived his life outside of the spotlight, in a city named after the ancient Egyptian metropolis where legend held that the gods themselves were born... MEMPHIS. The Television Years Witness Elvis' groundbreaking television appearances in the 1950s when e got the establishment all shook up with his 'morally indecent' gyrations and raw rock sound. You'll hear funny and revealing reminiscences about Presley's impact on America from such notables as DICK CLARK, ED MCMAHON, KENNY ROGERS, AND THE DOORS' RAY MANZAREK, and extraordinary behind-the-scenes memories from Elvis' drummer D.J. FONTANA, who was right there with Presley for those controversial appearances on THE MILTON BERLE SHOW, THE STEVE ALLEN SHOW, and of course THE ED SULLIVAN SHOW, where Elvis was photographed from the waist up 'so as not to offend.' You'll also watch an amazing duet between the King of Rock 'n' Roll and the Chairman of the Board from a landmark 1960 FRANK SINATRA special welcoming Elvis home from the army.