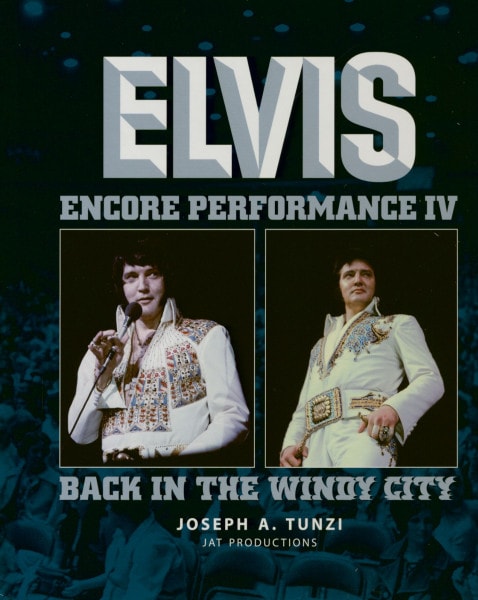 Elvis Presley: Encore Performance IV - Back In The Windy City

A fantastic book and a real fan favorite! Out of print now!*****

Elvis Presley’s connection to Chicago can be measured in two ways. First, we can name the number of people he associated with who had Chicago roots. This group ' includes friend and road manager Joe Esposito,  Colonel Parker’s right-hand man Tom Diskin, and  famed "Elvis has left the building”announcer Al Dvorin. Certainly this is interesting trivia, but- the most substantial Chicago/Presley correlation can be found  by re?ecting on the impact Elvis and music made on the city. Certainly one of his most loyal fans was Ral Donner. In the early sixties Donner scored a number of hits with a string of credible Presley sound-a-like records.  He narrated the docudrama This Is Elvis in 1981, and continued to perform until his death in 1984.

The influence of Elvis on Chicago is further demonstrated by the existence of JAT Publishing itself. Since its inception in 1988, JAT Publishing has been proudly based in Chicago. Over the last twenty-three years, a main objective of the company was to make good use of our locale by thoroughly chronicling Elvis' visits to the region. In 1990, Joseph A. Tunzi based his first photo journal, Elvis, Encore Performance, around Elvis’1972 appearances here. In 1999 Mr. Tunzi assembled a follow-up to the book: Elvis, Encore Performance III, Back To Chicago 1977. This entry in the JAT canon mainly represented Elvis’ May 1, 1977 concert, but it also delved back into Elvis’ entire career. Of note were beautiful images from Elvis’ Chicago outings in 1972 and 1976. Over the years other Chicago photographs have been utilized wherever appropriate, perhaps the most stunning image appearing in Elvis:America The Beautiful. There we see a 1976 color candid of Elvis looking relaxed and fit at the Arlington Park Hilton in Arlington Heights.

The video division of JAT has also chronicled  Elvis’ Chicago jaunts in the Hot Shots & Cool Clips  DVD series. Footage of Elvis at the International Amphitheater on March 28, 1957 graced volumes 1  and 3, while Elvis’ June 16 and 17 evening performances at The Chicago Stadium in 1972 were featured in stunning quality on volume 2. Not having a TV crew  or lights to inhibit him, these segments are more  raw and natural than what can be glimpsed in a  more professional setting.  Surviving audio and visual elements, as well as contemporary reportage, allow us the chance to  impart the facts about every Chicago gig Elvis performed. In this book we bring together all of the various sources in the JAT archive to bring you the  definitive look at Elvis’ time spent in the Windy City."