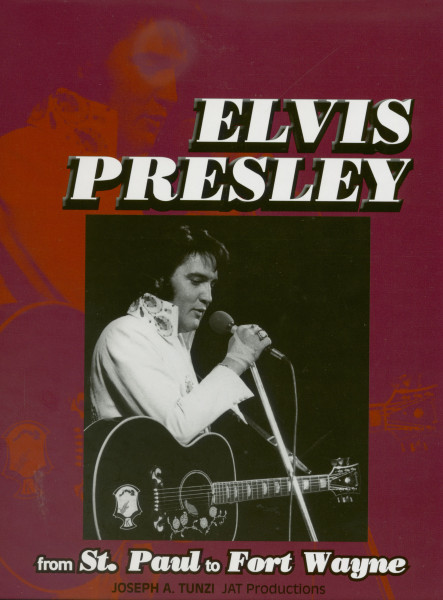 From St. Paul To Fort Wayne
by Joachim Bernecker (aka “Ciscoking”) / Joseph A. Tunzi

Elvis Presley’s performances in St. Paul, Minnesota on October 2,1974 is featured prominently in this book. There was another show on October 3rd both of these performances were evening shows beginning at 8.30 pm. These concerts were part of “tour no. 12” which started on September 27 in College Park, Maryland and concluded on October 9 in Abilene, Texas. In total the star delivered 15 sold out shows in 9 different cities. On October 2nd Elvis entered the stage dressed wearing his beautiful Peacock jumpsuit as 17.163 screaming fans greeted the King. He did his usual opening routine with See See Rider, I Got A Woman and Love Me and he caused as much excitement as ever near the stage when he started tossing out scarves.

The fans loved his oldies although he already didn’t care much about them anymore. He had done them too often. But he could still prove his musical talent when it came to more recent songs like Let Me Be There, If You Love Me Let Me Know or It’s Midnight or ballads like Hawaiian Wedding Song. The never ending ovations for such moments were proof enough that Elvis had done it again. And when he moved his body to certain songs like Polk Salad Annie  in his inimitable way, the fans couldn‘t be held in their seats. The October 3rd experience in St. Paul where Elvis wore the Chinese Dragon Suit also received positive reviews.