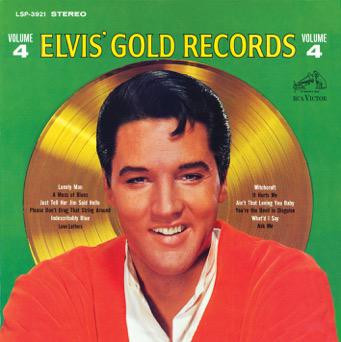 (2016/Follow That Dream) 36 tracks with a stunning 12 page booklet.
It was 10 years after the release of Elvis’ Golden Records in 1958, that RCA Victor released Elvis’ Gold Records Volume 4. It contained seven ‘B’ sides and only five ‘A’ sides. Whether at the behest of Colonel Tom Parker, or RCA, the philosophy of not including tracks that already featured on existing albums weakened what could have been a more powerful and hit-laden compilation. Although omitted from Volume 3 for the same reason, the addition of “Can’t Help Falling In Love”, “Return To Sender” would surely have enhanced it’s sales potential and the inclusion of “Crying In The Chapel” (albeit included on How Great Thou Art in 1967) should have provided the icing on the cake. However, for dedicated Elvis fans, it was still rewarding to get these songs on a long- playing album for the first time such as “Love Letters”, “It Hurts Me” and “A Mess Of Blues”. Other hits that could have featured are added to Disc 1 as bonus tracks and Disc 2 features the entire original album in glorious mono!