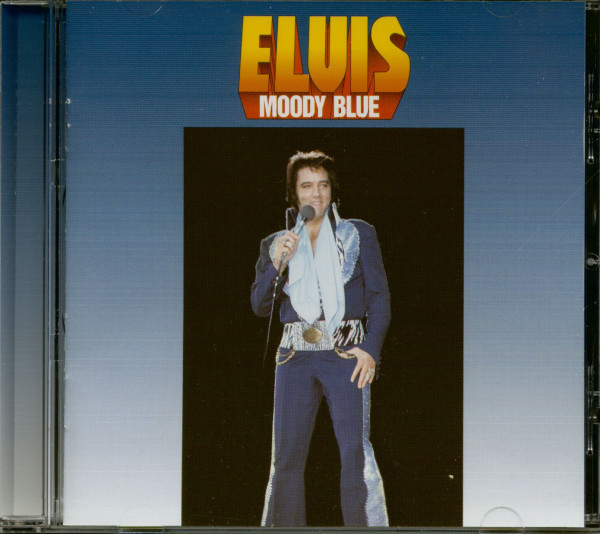 (2000/RCA) 19 tracks (62:26) with 8 page booklet. EU pressing
-
'Moody Blue' the last album released during Elvis' lifetime. It appeared some twenty-one years after his first epochal album and had been on the market just two months when the world was stunned by the news of his death. Despite his well-publicized personal problems, Elvis' musical vision was remarkably intact at the end. 'Moody Blue' was Country, Pop, and R&,B. Elvis was combining and reinterpreting the textures of the music he loved. The first album had been no less than that, 'Moody Blue' held fast to his credo.

During Elvis' last years, RCA found it all but impossible to get their reluctant superstar into a studio. Elvis seemed wearied by the prospect of meeting the commitment of two albums and four singles a year called for under his 1973 contract.Too often, producer Felton Jarvis had to rely on "live" recordings to satisfy the quota. Indeed, four of the original ten recordings on MOODY BLUE were live. One of those original ten recordings, "Let Me Be There," has been omitted from this upgrade because it appeared earlier on 'Elvis Recorded Live On Stage In Memphis'. In its place are the ten additional recordings from the last eighteen months of Elvis' life, first released on 'From Elvis Presley Boulevard, Memphis, Tennessee'.

Colin Escott (from the liner notes)