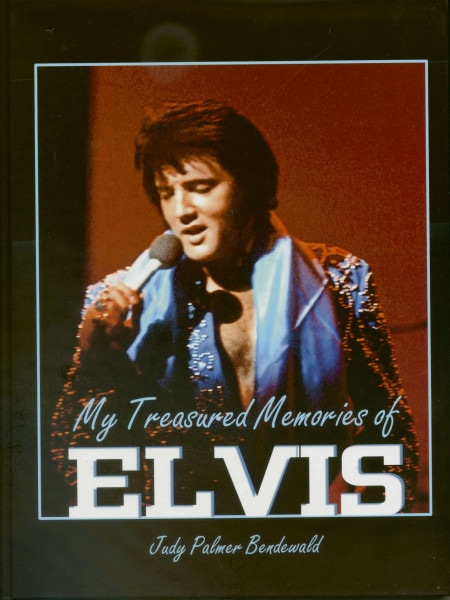 Introduction
I met Judy about five years ago even though we grew up in the same town and have much in common — not the least of which is a love for Elvis. While shopping one day at Nordstrom, where Judy works, a saleswoman noticed my Elvis purse and asked me, "Do you know Judy up in petites? She's an Elvis fan too." Curious, I went up the escalator, looking for a woman who might be my age or older. I put my pink "Love Me Tender" bag on the counter and asked, "Are you Judy? I hear you're an Elvis fan. So am I."

Within minutes, Judy's warmth and effervescent personality encircled me like a hug and I realized she was no average Elvis fan. We traded Elvis milestones like Elvis fans do when they meet for the first time: How many times did you see him perform in concert? How many times have you been to Graceland? When did you first love Elvis? And then came the bombshell — the revelations that trumped anything I had to offer in my modest Elvis life: Judy not only met Elvis, she kissed him four times, sat ringside for the iconic "68 Comeback Special," and was one of those famous "superfans" who author Jerry Hopkins profiled in his 1971 Elvis biography.

And then, almost as an afterthought, she mentioned her photographs. After regaining my composure I realized Judy was what we call in'the newspaper business "a good story." I suggested our local newspaper, where I worked at the time, profile Judy in the arts and entertainment section. There she was, in full color, with a big smile on her face, telling her story and talking about her photos. The newspaper reprinted an image of Elvis with his arm around Judy.
And here we are today; the book you are holding is the result of that serendipitous meeting at Nordstrom. This book took a lot of coaxing. Judy never gave up her devotion to Elvis, but after he died she moved on with her life, as many of us did. She married a wonderful man named Doug and raised two children. She became an All-Star saleswoman at Nordstrom. And she kept her most precious candids and concert photos tucked away in scrapbooks, hidden at a friend's house for safekeeping. Although Judy is a member of that small network of Elvis fans who shared candid moments with him in the 60s and 70s, it's not in her nature to talk about herself. But you'll soon discover this book has much to offer.

Judy's stories take you back to the time when Elvis was at his peak. She shares hilarious stories about camping out at Graceland, waiting for any chance to see Elvis. She talks about the signed condolence card she got from Elvis and Priscilla when Judy's mother was killed. And then there are the photographs — some of the most recognizable images in the Elvis world — and not until now is Judy getting the credit she deserves for taking them.

Judy taught herself how to take photos so she could keep for a lifetime her memories of Elvis. And now she shares them with you, and even more importantly, puts the images together with the real stories behind them.
You're in for a treat.
Carla T. Savalli February 2009