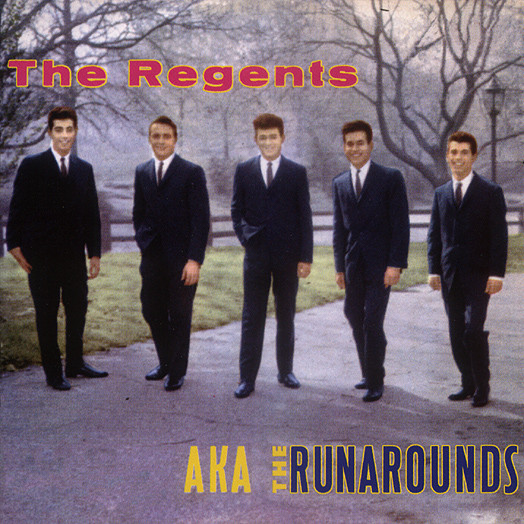 REGENTS: Aka The Runarounds

Artikeleigenschaften von REGENTS: Aka The Runarounds

The Regents' storming Barbara-Ann almost never saw light of day at all. They were another Bronx group that started out in 1957 as The Monterays with lead singer Guy Villari, tenors Sal Cuomo and Chuck Fassert, and Ernie Maresca (co-writer of Dion's Runaround Sue). Their demos eventually got them signed to Seville Records, but nothing happened and the group morphed into The Regents.

Named after a New York recording studio they frequented and a brand of smokes Guy favored, The Regents consisted of Villari, Cuomo, Fassert, bass Don Jacobucci, and for a 1958 session at Associated Studio in Manhattan, saxist/baritone vocal Tony 'Hot Rod' Gravagna. It took 50 minutes to satisfactorily get A Teenager's Love on tape. Since their $15 bought them an hour's worth of time, they spent the other 10 minutes cutting Barbara-Ann, penned by Chuck's brother, Fred Fassert.

Unable to interest any of the countless record labels in New York in the tapes, the group threw in the towel. Some time later, Don's younger brother Eddie Jacobucci decided to revive Barbara-Ann with his own group, The Consorts. Operated out of Lou Cicchetti's record shop in the Bronx, tiny Cousins Records opted to release the original version by The Regents instead in March of '61, placing I'm So Lonely on the B-side. The quintet reunited and saw their old master rocket to #13 pop and #7 R&B that spring after Morris Levy's Gee Records picked it up.

The Regents' Gee followup that summer, the Maresca-penned Runaround, made it to #28 pop and #30 R&B. Their next two offerings, Cuomo's Liar and Maresca's Lonesome Boy, didn't follow suit. Their Gee LP saw The Regents wrap their pipes around Summertime and Autumn Leaves, certainly more highbrow than Barbara-Ann. Dissatisfied with their royalty statements, The Regents hung it up. Guy and Chuck started a new vocal trio, The Run-A-Rounds, whose '63 release Unbelievable for KC Records bore Maresca's co-writing imprimatur (Carrie [You're An Angel] followed the next year on Felsted). Fred Fassert ended up the big winner when The Beach Boys revived Barbara Ann, escorting the anthem to a lofty #2 pop in 1966.