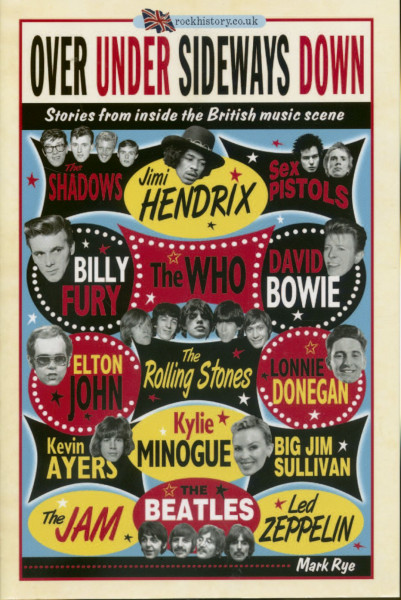 Mark Rye: Over Under Sideways Down

The underbelly of the last fifty years of the British music scene is laid bare by people who were there, The Beatles, The Stones, The Who, Floyd, Bowie, Bolan, Reg, Queen, etc., all have fascinating parts of their stories being told here for the very first time. Included are numerous musicians, songwriters, managers, agents, I. pluggers, record company executives, DJs, roadies, music publishers, producers, engineers, journalists and entrepreneurs alike, and their anecdotes range from the hilarious to the salacious, the unlikely, the Midownright ridiculous, and the near-slanderous.

But now the inevitable has begun to happen....i.e. the march of time has intervened, and now some interviewees have sadly died, which renders Op their stories all the more poignant and this book more important. Classic examples being Bryan Morrison's bitter-sweet memories of his attempt to manage a dysfunctional Syd Barrett, or his inadvertently working with the Kray Twins.

Kevin Ayers recalling touring with Jimi Hendrix, Neil Christian on finding a young Jimmy Page, EMI Records boss Bob Mercer's time with John Lennon & Keith Moon, manager Matthew Sztumpf trying to make sense of Madness and The Smiths, and 'Big' Jim Sullivan's route to playing pi on all those hit records. All these stories and more are captured before they slip away.

It makes for a compelling read, and at last you can hear, first hand, some of Rock Music's eternal myths and facts either confirmed or quashed, by the people who were actually there when they happened

Artikeleigenschaften von Mark Rye: Over Under Sideways Down