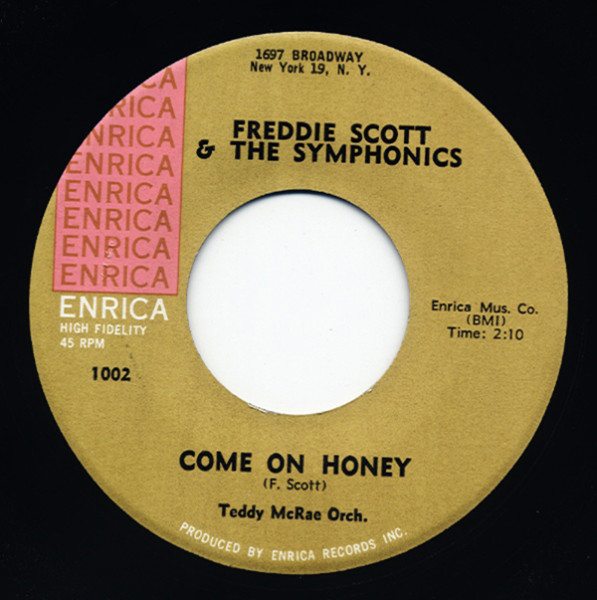 Freddie Scott: Come On Honey - A Blessing To You 7inch, 45rpm

Artikeleigenschaften von Freddie Scott: Come On Honey - A Blessing To You 7inch, 45rpm

Are You Lonely For Me Baby

Are You Lonely For Me Baby

Although he originally had every intention of becoming a songwriter, Freddie Scott's pipes were too powerful to be denied. On a New York scene brimming with uptown soul balladeers, Freddie owned one of the suavest deliveries around. Born April 24, 1933 in Providence, Rhode Island, Scott sang with his grandmother's group, Sally Jones & The Gospel Keyes, when he was 12, even journeying to England with them. Attending Paine College in Augusta, Georgia, he fronted The Swanee Quartet Juniors.

In 1956, Freddie cut his first single under his own name, and it wasn't gospel. Zell Sanders issued his Turn The Lights Down Low on her New York-based J&S logo. Freddie made more platters for Bow, Arrow, Enrica, and Joy. But this was the Brill Building era, and Scott signed on as a writer with Don Kirshner and Al Nevins' Aldon Music. One day Aldon mainstays Carole King and Gerry Goffin asked him to demo their stately ballad Hey Girl. They intended it for Chuck Jackson, but when that didn't work out, they came back to Freddie and asked him to do it for public consumption. Out on Colpix Records (an offshoot of Columbia Pictures) and lushly arranged by Garry Sherman, Hey Girl was a Top Ten pop and R&B smash in 1963.

Scott scored a couple of lesser follow-ups for Colpix (a revamped treatment of Ray Charles' I Got A Woman and Goffin and King's Where Does Love Go) before moving over to Columbia Records, where nothing really clicked. Then producer Bert Berns, an uptown soul master, beckoned with an offer to join his recently inaugurated Shout label. Berns had just the vehicle to relaunch Freddie: the magnificent Are You Lonely For Me Baby. With Sherman again arranging and such New York studio pros as pianist Paul Griffin, guitarist Eric Gale, and The Sweet Inspirations on hand, Scott belted the repeating vamp line 'I'm coming home' like his hair was on fire. Freddie had himself a throbbing number one R&B smash that climbed to #39 pop that couldn't be bettered even by Chuck Jackson, who would cover the song in '69 for Motown.

Freddie's resultant Shout album 'Are You Lonely For Me?' was a classic, and he continued to nail mid-level hits for the label—Am I Grooving You and a cover of Van Morrison's He Ain't Give You None in '67, the Kenny Gamble & Leon Huff-helmed (You) Got What I Need the next year. But when Berns died at the end of 1967, Shout lost its guiding force. Scott charted for the last time in 1970 with a rendition of Bob Dylan's I Shall Be Released for ABC's short-lived Probe subsidiary. There were more 45s for more labels, but none came close to the majesty of Are You Lonely For Me Baby. Scott died June 4, 2007, leaving a legacy of uptown soul brilliance behind.