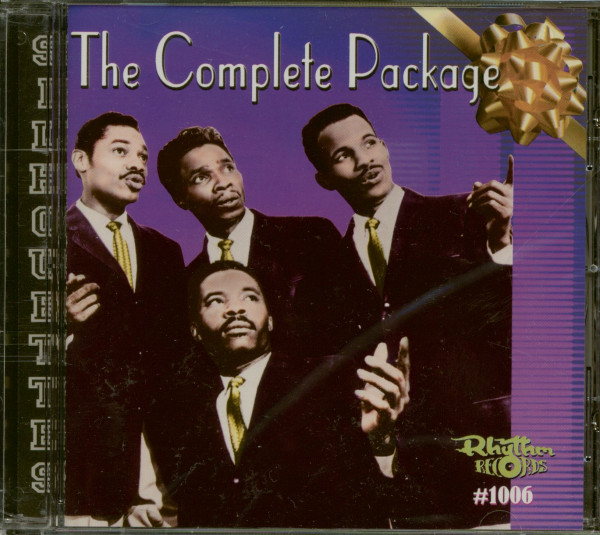 Few recordings typify the archetypal doo-wop sound more indelibly than The Silhouettes' Get A Job. Bass singer Raymond Edwards' booming "Sha-na-na-na, sha-na-na-na-na-na-na," "dip-dip-dip-dip-dip" chant was so eternally memorable than an oldies revival act named itself after it.

The quartet coalesced in Philadelphia. Edwards, a Virginian born September 27, 1922, and baritone Earl Beal, born in Denora, Pennsylvania on July 18, 1924, formed the sanctified Balladeers in 1951. Edwards waxed a secular single for Herman 'Piney' Gillespie's Nestor label in 1954, the same year Bill Horton, born on Christmas Day of 1929 in Hickory, North Carolina, joined The Balladeers as lead tenor (he'd sung gospel back home with the otherwise all-female Soulettes). Ex-Parakeets tenor Richard Lewis, born September 2, 1933 in Philly, was last in after The Balladeers were renamed The Gospel Tornadoes.

With money tight, The Gospel Tornadoes made the secular leap to become The Thunderbirds. An audition for deejay Kae Williams got them a deal in October of 1957. "We did the session in a radio station studio," said the late Lewis. Williams was high on their ballad I Am Lonely, but it was Get A Job, its genesis mostly the work of Lewis though all four members are credited with writing it, that would be a smash. Rollee McGill, whose There Goes That Train was a '55 R&B hit, handled the sax solo. "He just winged it," said Lewis. Ex-Ravens pianist Howard Biggs was brought in to arrange Get A Job and nearly wrecked what came to define it.

"When Howard Biggs came to our rehearsal, 'Get A Job' was intact,"said Lewis. "The story is that Howard Biggs wrote the 'dip-dip-dip-dip-dip' part. But that's not true. He wrote a musical introduction to bring us in, and then we'd start the song. When we got into the studio, it didn't work. So we ended up doing the song like we had always done it."Before its release, the quartet changed its name one last time, inspired by The Rays' hit Silhouettes. Kae released Get A Job in November on his Junior label, but he couldn't handle the overwhelming response, so he handed the masters to Al Silver's Ember Records in New York.

In early '58, Get A Job topped both the R&B and pop charts. The Mills Brothers tried to update their image by covering it for Dot, their rendition making it to #21 pop. The Miracles (Got A Job) and Heartbeats (I Found A Job) checked in with answers. You'd think another hit would have been a breeze for The Silhouettes, but neither Headin' For The Poorhouse nor Bing Bong, fine rockers though they were, did the trick. Williams switched his national connection to Johnny Vincent's Jackson, Mississippi-based Ace Records for The Silhouettes' treatment of The Basin Street Boys' oldie I Sold My Heart To The Junkman, but what made them stars only a short time prior was dissipating, thanks to their misguided handlers.

"'Evelyn' and (its flip) 'Never Will Part,' they don't even sound anything like the style of singing that The Silhouettes did,"said Lewis. "It was stuff that they had written and wanted done, and we did it." The Silhouettes were has-beens by 1959, though they made a '61 one-off for 20th Century. Horton and Edwards left; Lewis and Beal kept the group going with other members, making singles for Grand, Imperial, Junior, and Jamie as well as a 1968 single and LP for Goodway. Horton died of heart failure on January 23, 1995. Edwards passed away in 1997, Beal on March 22, 2001, and Lewis was the last to go on April 19, 2005.