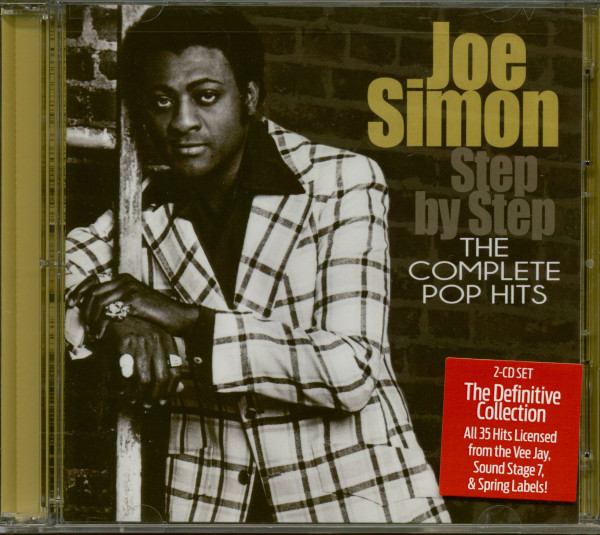 Call Joe Simon the reluctant soul star. "My heart was never in it, but I could sing rhythm and blues," he claims. Often sounding like his collar was a little too tight, his tense, emotionally charged baritone was particularly attuned to transforming country songs into soul gold.

He was born September 2, 1943 in Simmesport, Louisiana. "When I was a kid, I was a gospel singer," he says. He moved to Oakland, California in 1959, joining a vocal group, The Golden Tones, that debuted on Garrie Thompson's little Hush label in 1959 with Doreetha. Jealousy over a deejay mentioning Joe's name on the air broke them up, and Simon recorded consistently as a solo for Hush and its Irral and Gee Bee logos after that. His devotional soul ballad My Adorable One got picked up by Vee-Jay in 1964, and Simon was on his way. "It was me," he says. "I had found myself."

Vee-Jay sent Joe down to Rick Hall's Fame Studios in Muscle Shoals, where he cut his first hit, the Dan Penn/Spooner Oldham-penned '65 deep soul classic Let's Do It Over. But a problem arose. "Vee-Jay was in bankruptcy court, and they couldn't press it," says Joe. Nashville's top R&B deejay, WLAC's John Richbourg, was basically in charge of Monument's Sound Stage 7 R&B subsidiary. "We did a shake-hand agreement," says Simon, whose first SS7 offering, Teenager's Prayer, was a 1966 hit.

The plaintive My Special Prayer followed suit in 1967, as did Penn and Wayne Carson Thompson's chain gang lament Nine Pound Steel. "Most of my records was country songs," says Joe. "I took 'em out of country and put 'em in rhythm and blues." The hits came hot and heavy in 1968: the Memphis-cut pounder No Sad Songs was followed by a country-soaked (You Keep Me) Hangin' On and the weepy epic Message From Maria. But they were all eclipsed by The Chokin' Kind, a '67 C&W hit for Waylon Jennings.

Cut in Nashville and driven by Wayne Moss' churning bass, The Chokin' Kind went to #1 R&B and #13 pop, winning Simon a Grammy. "I got it from Harlan Howard," he says. "They put it on my desk. And we listened to it and went in the studio." Many more SS7 hits were around the bend, and that handshake deal was so firm that John R stayed at the helm even when Simon moved to Spring Records. Eventually Joe teamed with Kenny Gamble and Leon Huff to wax his early '70s Spring smashes Drowning In the Sea Of Love and Power Of Love.

In 1987, Simon enthusiastically abandoned his secular career to preach, never looking back. He's now a minister at a church in a southern suburb of Chicago.