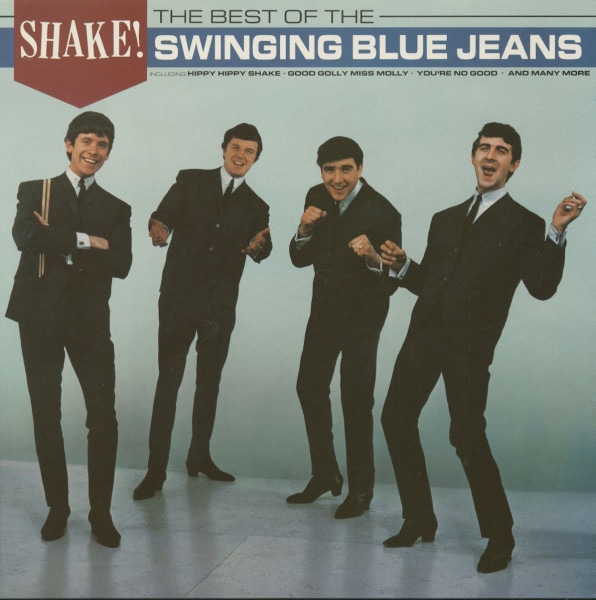 In 1961, when compiling a personal list of the best Liverpool bands for the paper Mersey Beat. Cavern disc jockey Bob VVooler paced the Beatles firmly at No. 1. Beneath his Top Ten list he added the comment: 'Excluding the Bluegenes, of course. They are beyond comparison. They are it a class of their own.' Known at the time as the Swinging Bluegenes, the group originally took flight in 1957 during the skiffle boom.

They were led by Ray Ennis who, together with bass guitarist Les Braid, still performs with the band I affectionately call the 'Mersey Methuselah, because they are the longest-lasting group ever to emerge from Liverpool. In an interview in 1963, Les revealed to me his memories of their early days: 'During the skiffle days I used to go down to the Cavern. I was in the club one day when one of the groups appearing there -Johnny Carter & The Hi-Cats, came without a string-bass player so I just went up and asked them if I could join the group. They jumped at the chance as there weren't any bass players about in those days. During the time I was playing with the group the Bluegenes asked me to do jobs for them, and eventually I was getting more work off the Bluegenes than the other group, so I joined them.

'It was about 1959 and there weren't that many groups around - the Beatles weren't heard about in those days and there was more jazz being played at the Cavern than anything else. We used to have a three-quarter of an is spot every Friday. Saturday and Sunday and later on we had a guest night on Tuesday evenings. The Cavern had been closed on Tuesdays and we made arrangements with Ray McFall about playing on those nights and Ray suggested we had guest groups. This was in 1961 and the groups we had as guests included Gerry, the Searchers, Billy Kramer and the Coasters and, of course, the Beatles...

Early in 1965 I dropped around to see the Swinging Blue Jeans perform at London's La Valbonne club and Ray recalled the night the Beatles made their debut as their guests at the Cavern on March 21st, 1961. Ray didn't think they were very good and after listening to them perform two numbers he went to the White Star pub for a drink. Les noticed that their average audience of sixty had swelled to almost two hundred for that first Beatles performance and he was quite impressed by their local fan following. The Blue Jeans were a quintet at the time but John Carter left two months later and they decided to remain a quartet.

Their original line-up had been washboard, tea chest bass, guitar and banjo. Washboard payer Norman Kuhlke became their drummer and remained with the band until 1969. Banjoist Paul Moss aft in 1960 and wasn't replaced. The line-up and personnel who performed on their initial hit singles lasted from 1961 to 1966 and comprised Ray on rhythm, Les on bass, Norman on drums and Ralph Ellis on guitar. Ralph was replaced by Terry Sylvester, former member of the Escorts in 1966 and the quartet became a quintet the following year with another ex-Escort, Mike Gregory on bass [Les became organist for a time). Terry left to join the Hollies and by 1970 Mike had also left and was replaced by Billy Kinsley, former member of the Merseybeats who was to leave and form Liverpool Express. Ray and Les were then joined by Mike Pynn on lead and John Lawrence on drums for a while and they were replaced in 1975 by Hedley Vick and Chris Mute. Garth Elliott replaced Hedley in 1975 and in 1978 Les and Ray were joined by Colin Manley, former member of the Remo Four on lead guita r- vocals and Ian McGee on drums. Ian was replaced by John Ryan fora while and finally Phil Thompson, former member of Champagne, took over the drum seat in 1984.

Strangely enough, the group didn't receive a placing in the first Mersey Beat poi listing of the 20 most popular groups in Liverpool in 1961, despite the fact that they were firmly established locally and were always in work. The following year they entered the poll at No.11. This could well have been because of their image at the time. They'd been regarded as a skiff, band and their stage outfits were rather 'square. compared to what the other groups were wearing. Once they'd changed Bluegenes to Blue Jeans, actually wore jeans on stage and turned to rock 'n' roll, things began to happen very swiftly for them. In the wake of Brian Epstein, several managers sprang up locally to follow his system of promoting a stable of acts. One of the most professional of these was Jim Ireland, who ran some popular clubs. the Mardi Gras and the Downbeat. Apart from the Blue Jeans, he managed the Escorts. Earl Preston's Realms and Cy Tucker's Friars. Jim was on the ball with the Jeans, signed them to HMV and their debut single 'It's Too Late Novv,' was issued in June, 1963, followed by 'Oo You Know' in September. It was their third disc 'Hippy Hippy Shake' which launched them into the big time.

This particular disc brings back memories to me because I'd been campaigning in Mersey Beat for someone to record the number. John Lennon must have had this in mind when the Blue Jeans single was prayed on the all-Beatles edition of 'Juke Box Jury' on December 7th, 1963. He said: 'I prefer Bill Harry's version.' As a result, kids all over the country were going into shops asking for Bill Harry's version of the 'Hippy Hippy Shake', which didn't actually exist.

Under Jim Ireland's astute management and also due to their professional attitude. the Swinging Blue Jeans became popular on a national level. In November, 1963 they began their own regular Radio Luxembourg show 'Swingtime' and the following month appeared on the Christmas edition of the popular TV series 'Z Cars' performing 'Hippy Hippy Shake'. 'Angie' and 'Money.'

The following year they appeared in 'Circularama Cavalcade', a new film process in which the screen surrounded the audience, read from Shakespeare at Durham University; performed at the finishing post of a major Race meeting; participated in the famous Denby Dale Pie ceremony and teamed Up with Les Ballets Africain's for a performance. 1964 was, indeed, their peak year and they only had one further chart hit 'Don't Make Me Over' in 1966. Yet the group continued to perform around the world for a further twenty years and during 1984 appeared in Australia. New Zealand, Germany, Denmark, Sweden, Norway, Finland, Holland, Belgium, Switzerland, Austria and the Middle East.

Leader Ray Ennis and his wife Olwyn have two children, Jason and Mandy and Ray opened his own private members Snooker club, the Crompton Club, in Formby, Merseyside in 19E11 in an area where all the group members have houses. Les and his wife Lynn have two children. Nicola and Michael and Les also runs a successful painting and decorating firm. Guitarist Colin and his wife Sheila have a son John and daughter Julia and Colin runs a guitar school for youngsters whenever he isn't touring. Phil, the only unmarried member of the band, ,S a part-time movie actor.

The Swinging Blue Jeans followed the classic Merseybeat route to success, from Liverpool skiifie groups to the Cavern • and Hamburg and, finally, an HMV record contract in 1963. Previously known as the Bluegenes, they were made up of Ray Ennis (lead guitar, born May 26, 1942), Ralph Ellis (rhythm, March 8, 1942), Les Braid (bass, Sept. 15, 1941) and Norman Kuhlke (drums, June 17, 1942). Like many of their compatriots, the Blue Jeans were seldom able to re-produce the excitement of their live act on record, and they also suffered from a lack of strong original material.

Their only three Top Twenty records were all covers of American songs — Chan Romero's 'Hippy Hippy Shake', Little Rich-ard's 'Good Golly Miss Molly' and Betty Everett's 'You're No Good'. The first two in particular conveyed a certain enthusiasm and excitement which took them into the American charts on Imperial.