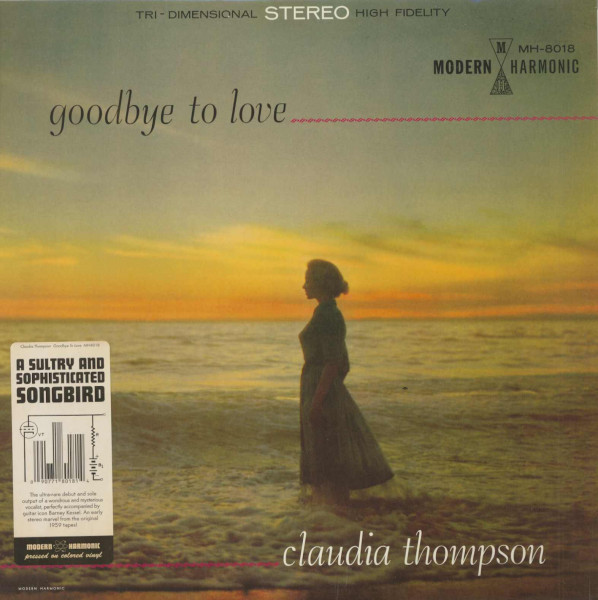 (2016/Sundazed) 12 tracks.
A sultry and sophisticated songbird. The ultra-rare debut and sole output of a wondrous and mysterious vocalist, perfectly accompanied by guitar icon Barney Kessel. An Early Stereo marvel from the original 1959 tapes! Kessel was a jazz pioneer - as one of the leading lights of the hard-bop movement, his jazz guitar was legendary, and he was ranked the No. 1 guitarist in Down Beat and Playboy for numerous years. He played with Sonny Rollins and Oscar Peterson and Ella Fitzgerald as well as leading his own super-tight group. On albums such as The Poll Winners, Kessel defined the bop style with a jazz 'power trio', creating a body of work that made him a legend. Not much is known of Thompson - even though the record's a long-time crate digger classic, she remains a mystery. But her stunning voice will knock you out - sounding like the precedent of singers like Karen Carpenter, her no-nonsense, emotion-soaked singing carries marvelously a collection of standards including 'Stormy Weather' and 'Body And Soul'. Kessel's remarkable playing provides a sparkling backing for her vocals. The album has been pressed onto gold vinyl and wrapped in a restored sleeve that captures the beauty of the era. Claudia Thompson has a perfectly tuned, and wildly dramatic voice. Picture a female Chet Baker; you’ll have to hear it to believe it.

12,50 €
Kunden kauften auch
Kunden haben sich ebenfalls angesehen
Goodbye to Love (LP)
Tracklist
Thompson, Claudia - Goodbye to Love (LP) LP 1
01 Some Of These Days
02 Body And Soul
03 If I Should Lose You
04 Stormy Weather
05 I’m Through With Love
06 The Morning After
07 Goodbye
08 Blue Prelude
09 You Call It Madness
10 Fan M
11 I Was Yours
12 Gloomy Sunday
Funktionale