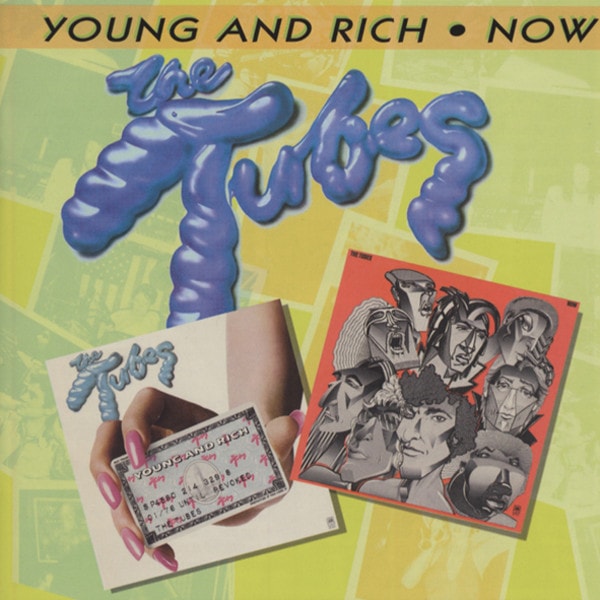 When satirical San Francisco rock band the Tubes began their recording career in the mid-1970s, it might have seemed unlikely that any group whose most popular songs were "Don't Touch Me There" and "White Punks on Dope" would make the Top Forty. But by the time they played New York City's Palladium on August 4, 1981, the Tubes had just done exactly that. Their single "Don't Want to Wait Anymore" entered the charts at the beginning of the summer, peaking at #35. The album from which it came, The Completion Backward Principle, did so as well, and indeed performed almost exactly as well, rising to #36. Broadcast on FM radio, nearly an hour of performances from this show are featured on this CD.

Naturally songs from their recent LP were spotlighted, seven of them hailing from The Completion Backward Principle. And naturally, one of those seven was "Don't Want to Wait Anymore." Filling out the program were some favorites from their earlier albums, coming to a climax with a seven-and-a-half-minute rendition of "White Punks on Dope." When the Tubes started their recording career in the mid-1970s, they were as noted for their theatrical stage show as their songs, "Don't Touch Me There" (their sole Top Hundred national chart single in the `70s) and "White Punks on Dope" being the most celebrated. But as singer Fee Waybill told Kerrang! magazine's Chas de Whalley in 1983, "We were losing money hand over fist.

All those TV screens and other props and stage sets cost too much to take on the road. The show had also gotten so spectacular that the music simply couldn't compete. Kids would leave the concerts remembering all the routines and the big production numbers but forget the songs. And they didn't buy the records either. "In retrospect I think that was because the stuff on our first couple of albums wasn't really that good. Things like 'White Punks On Dope' and 'Mond° Bondage' still stand up, but not much else does. So we changed the lineup a little and tried out a couple of different producers until we elevated the quality of the music so that it could stand up in its own right. But then people started criticizing us for not putting on the big show any more. So we brought it all back." As for the move to a more conventional rock sound on The Completion Backward Principle, added Waybill, "It's simply that blatant satire doesn't make money and doesn't sell records either. And it certainly doesn't do anything to change the world. We finally got wise to the fact that people don't want to buy a record which makes fun of them, you know?

You gonna buy a record that's a joke on you? No way! Not in the United States, that's for sure." Songs from The Completion Backward Principle formed the backbone of the performances on this broadcast, with "Don't Want to Wait Anymore" introduced as follows: "No free drugs, but we have sex music. In fact, we have some more right now. Great, huh? This is for the girls, though." Those who hungered for something more vintage had to be satisfied with "Smoke (La Vie En Fulmer)" (from 1977's Now), "White Punks on Dope," and "Mondo Bondage," the last two of which had featured on their 1975 self-titled debut.

The outro for "Mondo Bondage" did at least supply some of the outrage, if mildly, for which the early Tubes were noted. "So that's what you wanted all along, huh?" was how the song was summarized from the stage. "Want sex music, right? Don't be ashamed. Everywhere we go, that's what they wanted, sex music. And drugs. The only band that used to give away free drugs. But no more, they got too expensive. No free drugs." "If we're not strong enough to make it on our own, we should get out of the business and start selling vacuum cleaners," Waybill had told Rolling Stone in mid-1980, shortly after they'd road-tested some of the material for The Completion Backward Principle "on a brief, back-to-basics tour of California clubs."

Judging from the review of the album in the same magazine the following year, the band succeeded, Parke Puterbaugh enthusing, "While it may not be the most enduring item in the Tubes catalog... The Complete Backward Principle is functional, entertaining and a tenable blueprint for a helluva live show." A live show, judging from the audience response at this concert, that went over well, though yet more success was to come when the Tubes made the Top Ten in 1983 with "She's a Beauty."