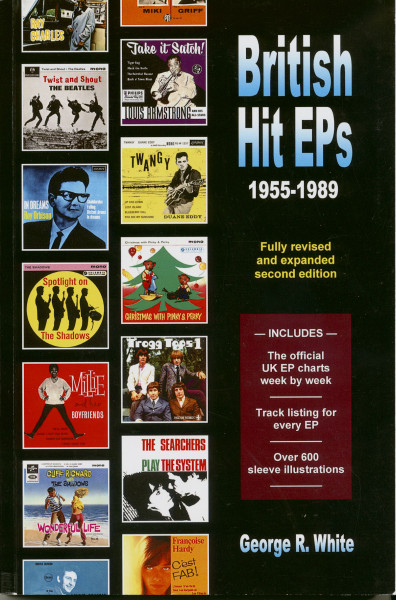 English, Paperback, 15.5x23 cm, 312 pages, At last, a chart book dedicated to British hit EPs! Includes a history of the format, an artist-by-artist listing of every 7-inch EP hit from 1955 to 1989 (with full track details for each record), analyses of chart performance, and - for the first time ever - the official UK EP charts reproduced in full. Profusely illustrated with over 600 sleeve shots. A collector's dream! Fully revised and expanded second edition.

Originally conceived as sort-of 'mini LP', the four-track extended play album or 'EP' achieved mass popularity in the late 1950s and early 1960s, later enjoying a revival during the punk/new wave era of the mid-1970s.

Attractively packaged in glossy colour sleeves and often containing rare material, EPs also rapidly acquired a following among discerning music fans and record collectors that continues to the present day.
This is the first British EP chart book ever compiled. It includes comprehensive details of every 7-inch EP that appeared in the UK charts between January 1955 and the end of 1989, analyses of the best-performing artists and records, the official UK EP charts in full, hundreds of sleeve illustrations and much more. Whatever your musical interests, you are certain to find plenty within these pages to inform and entertain you.

Introduction
The idea of an EP chart book was first suggested to me by my good friend, Morten Reff. Almost inevitably, it grew into a significantly larger undertaking than I had originally envisaged, but I hope the final result will prove to be a valuable source of reference for collectors and researchers for many years to come. Within the covers of this revised and expanded second edition you will find an artist-by-artist listing of every 7-inch vinyl EP that made the UK charts between January 1955 and the end of 1989, together with full track details for each release. This is followed by sections analysing various aspects of chart performance by artists and records, plus a complete breakdown of every EP chart published by the UK music industry magazine, Record Retailer.

For the sake of completeness, I have added an appendix documenting sixteen EPs that were listed as hits on other charts, but not by Record Retailer. Although it had initially been my intention to include only a handful of sleeve illustrations, I'm afraid my excitement and enthusiasm got the better of me and (excepting a handful of look-alike Volume 2's and similar), I ended up more or less going for the set. I hope that you will derive as much pleasure as I did perusing these wonderful artefacts of a bygone era. For reasons of space, sleeve shots appear in two places: either above the relevant artist's entry, or below one of the charts in which the record figured. To help you locate them, two indices are provided: one in straight catalogue number order, the other broken down by artist. Compiling this book has been an interesting and enlightening experience. More than anything, my protracted and at times frustrating search for EP sleeves brought home to me the rarity (and desirability!) of some of these items.

The Shirley & Lee EP, for instance, is virtually impossible to find and nowadays commands a price ticket well into three figures. Many others are keenly sought after and sell for around the £20 mark or considerably more. At the other end of the spectrum, it is still possible to pick up decent copies of some releases for a lot less than that from charity shops, car boot sales and eBay. Whilst every effort has been made to verify the accuracy of the information included, it is possible that errors may come to light after publication. Any additions or corrections are welcomed and will be incorporated into future editions.
George R. White York, October 2013