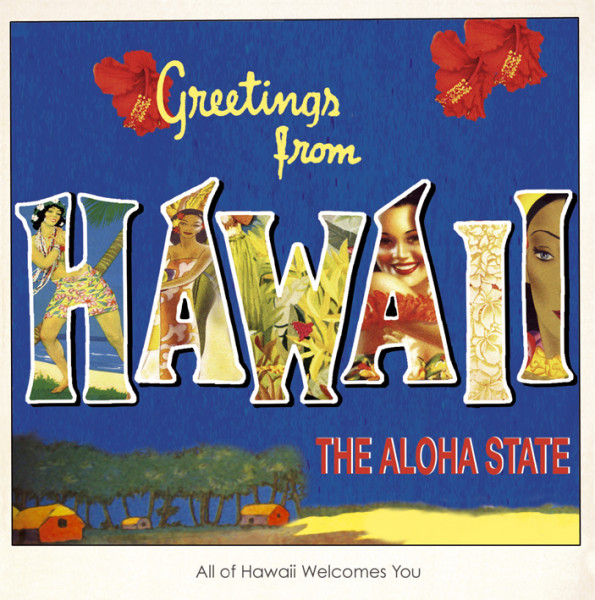 
Back in 1958, one of my teachers thought it would be a good idea to get us to talk about the possibility of statehood for Hawaii. Having a bunch of kids discuss current events seemed like a fine way to get our minds off sex and music. And so, like many Americans, he asked "Should Hawaii become a state?" After some silence, one of my classmates raised his hand and said, "No. Because it isn't touching."

This rather quaintly phrased objection expressed what many people felt back then. States were supposed to be pieces of land that bordered other states, and the US of A was a big hunk of land composed of adjacent little pieces. To include some islands way out in the Pacific that took god-knows how long to reach before jet travel was commonplace just didn't make sense.

But actually it did. And on August 21, 1959, Hawaii (along with Alaska – another non-contiguous piece of land) was granted statehood. Hawaii became the 50th state, stoking an upturn in the flag industry, as Americans rushed to update their 48-starred red, white and blue banners. Under all that national pride, the reasons for growth were not quite so pure. America had actually annexed Hawaii in 1898 and made it a territory in 1900, hoping to keep its economic advantages out of the hands of the Europeans. There was plenty of intrigue and some threats of violence surrounding these events, and more than another half century would pass before political and racial resistance to statehood would subside.

States all have their own unique identities, but none is more exotic and ethnically diverse than Hawaii. It's quite commonplace for Americans from the mainland who visit Hawaii to think of it as a foreign vacation. To this day, travelers arrive in Honolulu and ask what kind of money the locals use.

While it's true that American culture often assimilates everything in sight, it also leaves many superficial trappings intact. Thus, almost everyone has a sense of what 'Hawaiian music' sounds like. Unfortunately, for many of us, this conjures up images of Don Ho (or one of his numerous clones) singing Pretty Bubbles. In fact, this is unfair to Mr. Ho. Long before his popularity spread in the 1970s, there was an earlier epidemic of watered down Hawaiian music spreading across the US. At the turn of the century, Hawaiian songs were normally sung in their native language and rarely left the islands. In 1912, a stage play called 'Bird Of Paradise' opened on Broadway and was a smash hit. The show featured a troop of Hawaiian musicians performing in their native language. The 'New York Times' called the music "weirdly sensuous," which drew even larger audiences. After that, the play began to tour, taking this new music to listeners outside New York City. Just as this was happening, a 1915 San Francisco exposition of Pacific culture featured a show by the Royal Hawaiian Quartette, bringing native Hawaiian music and dancing to a west coast audience.

The American appetite for this strange new music grew almost overnight and non-Hawaiian songwriters struggled to produce Hawaiian-sounding product. Naturally, there was a limit to what Americans could digest, and so Hapa Haole songs were born. Strictly speaking, Hapa Haole means 'half foreign' although colloquially its meaning may be closer to "songs the accursed white man has stolen from us and exploited for his financial gain." The truth is, however, that Hawaiians, too, were making good money as the market for their native music spread to a whole new continent and brought tourism to their door.

Much Hapa Haole music contains just enough Hawaiian language to sound authentic. It wasn't uncommon for early Tin Pan Alley songwriters (whose Hawaiian vocabularies consisted of "Aloha!" ) to write gibberish that sounded Hawaiian and, with a ukulele and steel guitar to accompany it, who was likely to know, much less complain? Even standard pop songs in English could be made to sound Hawaiian if you threw in a few Hawaiian-sounding touches - some words, the right stringed instruments or a Hula rhythm. In the 1920s and 1930s, Hawaiian-based music literally flooded the market and accounted for a surprisingly large share of record and sheet music sales. On into the 1950s and later decades, Hawaiian songs were often viewed as 'novelty records.' Amazingly, they have retained their appeal across massive changes in American values. In fact, the impact of Hawaiian music has never been far from American popular culture ever since 'The Bird Of Paradise' hit the Broadway stage in 1912.

Greetings From ... CD-Album-Series by Bear Family  , ,