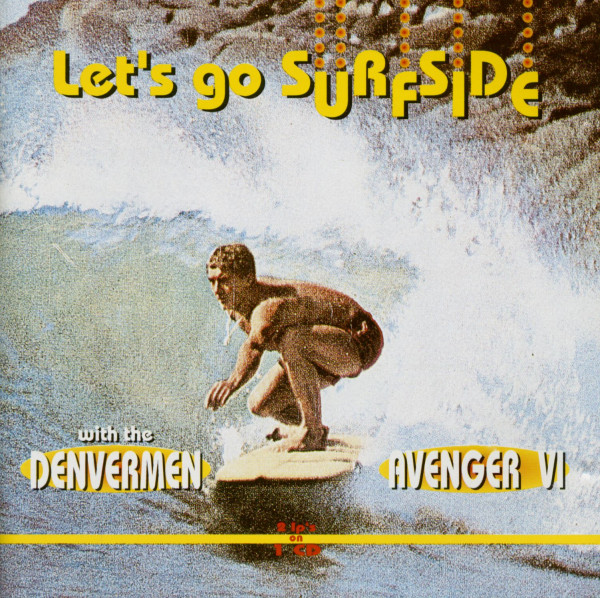 Various: Let's Go Surfside With The Denvermen and The Avenger VI (CD)

Here is the first Long Play Album from Australia's top local intrumentol group The Denvermen. Their singles have all hit the charts here and been released overseas.
This includes 'Stomp Fever' b/w 'The Sun Reeker their most recent single, with has also received recognition overseas. The Denvermen are in the front line of Australian musicians who have built a succesful television, personal appearance and record career by consistenly programming original compositions.
Les Green, lead guitarist with the group and Johnny Devlin, RCA's A &R Manager of locol Pop Recordings, share the writing honours fairly evenly between them for the twelve instrumentals on this album.
Perhaps this is why 'Let's Go Surfside With The Denvermen is so succesful in reflecting the local scene and current surfin' trend. It also showcases the brilliant sound that is their personal trademark.
Right through the summer season, you'll be playing Surf City Stomp, Surf Patrol, Ho-Dad, Surfer's Cha-Cha, Back Rip for your stomp, twist and cha-cha dance dates.
For relaxing and listening, there are to mood and bluesflovoured titles such as Quiet Beach, Surfer'sS Blues, Surfside Romance and others.
-
The Avenger VI :

It was during the peak years of instrumental surf music, 1961-1966, that most instrumental type surf band were organized. Most of these garage bands started up because of the popularity of Dick Dale and other popular bands of the time. The greater part of them being in the Orange Country area of Southern California. Unfortunately not all bands got an early start as in the case of a group of young aspiring musicians from Anaheim, California, called The Avenger VI.
As was the case, the boys were all friends who were influenced by the current music trend and decided to get together and play. What made them different was they didn't get started until surf music had peaked in 1964, in fact, they recorded their first surf-type album in 1966, over two years ofter the popularity of surf music had wanned.