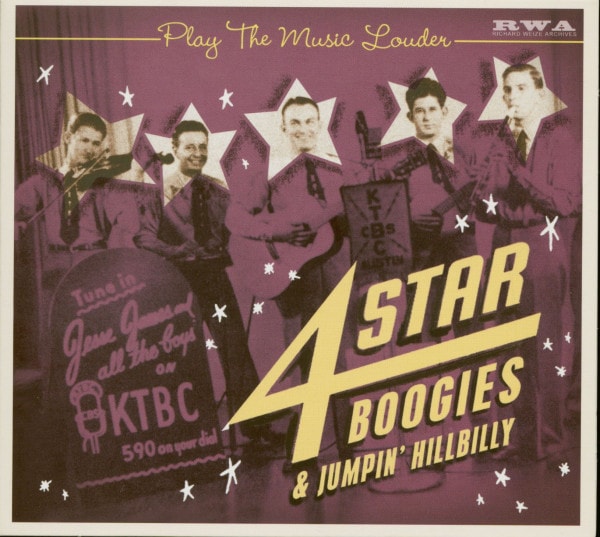 (2017/RWA) 25 Tracks (65:35) - Digipack with 60 page booklet by Kevin Coffey.
& ,-
'Independent record label' is usually used as a blanket alternative to draw a line between the handful of 'major' labels and every one else, but if there is a dazzling variety among the myriad companies that lie under that blanket. While the phrase might connote small time to some, or bring to mind operations that had only a handful of releases or at most a few dozen, there were among those Independents some that could oxymoronically be called 'Major Minors' —& , long-lived labels that might not have had the clout, distribution or regular chart action of the majors but which nevertheless released hundreds of records and included on their rosters some genuine stars. Syd Nathan's King Records comes to mind as one example, as does Bill McCall's prolific, important — and fairly notorious — Four Star label.
& ,-
Bill McCalls legendary 'Four Star' label began life in 1945 as a subsidiary of Dick Nelson's 'Gilt Edge' Records. McCall issued a considerable amount of good music, which today is highly collectable and indeed expensive to purchase. This CD focuses on Four Star's heyday as an important, influential, and independent label, and features vibrant recordings from 1947 to 1955.
The performers range from major names like the Wilburn Brothers, to regional stars like Jerry Irby, Jerry Jericho and Don Whitney who are still revered by collectors and fans of music of the era, to obscure performers almost totally forgotten today, like Owen Perry and Kelly West.
& ,-
The word boogie is perhaps to many associated with race music and black jump tunes, however these Hollywood Hillbillies could boogie in their own way. This stunning compilation presents 25 jumping hillbilly boogies, and with a well-chosen variety of artists and every track having a vibrant sound, its guaranteed to please.
This is a must-have for lovers of pre-rockn roll, country boogie sound, jumped-up honky-tonk, late-period western swing and offers a fascinating insight into the world of jumping country boogie.
With a running time of 65 minutes and 35 seconds and a booklet jam packed with information from compiler Kevin Coffey, you are on the right track to discovering many long forgotten tracks.

Will Make You Dance!

I loved this collection of jumpin' hillbilly tunes - some famous names in here and many lesser-knowns. Fantastic booklet of liner notes as well.