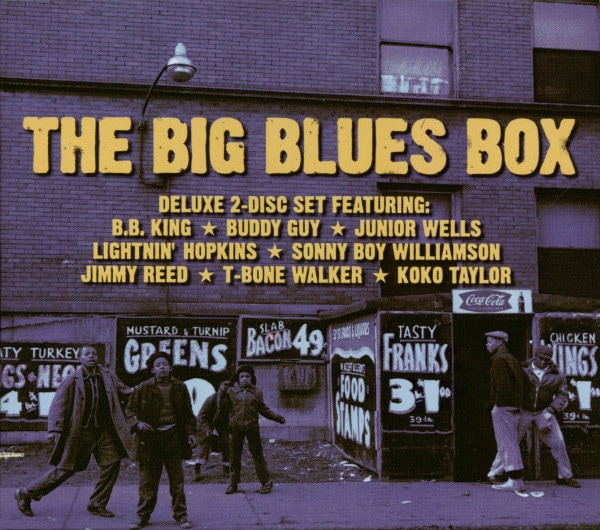 (Fuel) 28 tracks - slipcase packaging - liner notes by Bill Dahl - Restposten Cut-Out mit minimaler Markierung (1cm Schnitt an der Seite) - Top Qualitäts Schnäppchen!
-
That blues is a purely American art form cannot be denied. Facile as those bombastic rock-slanted British fretburners have grown over the last three-and-a-half decades, they'll never equal our home-grown blues talent. Even on those rare occasions when the overseas contingent manages to properly assimilate the instrumental passages, their pallid vocals inevitably fall short of the mark. Without the cultural context and spiritual roots informing the indigenous sound of legit southern blues, those Europeans don't stand a chance. Stan Lewis' Jewel/Paula/Ronn family of labels amassed quite a sturdy American blues legacy during its 35-plus years of operation. The Shreveport, Louisiana record company presented some of the nation's greatest blues legends, Lightnin' Hopkins, Lowell Fulson, and Little Johnny Taylor among them. Lewis also acquired the catalogs of several hallowed Chicago labels (JOB, Cobra/Artistic, Age/Chief/Profile, USA) that added immeasurably to its archives. From those vintage masters comes this collection, a tribute to our nation's enduring blues legacy.
-
The roots of American blues run deep and spread wide. Without the blues, it's difficult to envision the development of 20th Century popular music as we know it, and utterly impossible to imagine the birth of rock and roll. As with its predecessor American Blues Vol. 1, this collection brings together another passel of homegrown classics by some of the revered luminaries of the post-war era. Nothing slick or pretentious can be found here, just satisfying, straightahead stuff from the '50s, '60s, and '70s with a decidedly southern flavor that offers advanced insight on precisely what indigenous blues is all about (or should be, anyway).